Plan to Annihilate The Ten Commandments 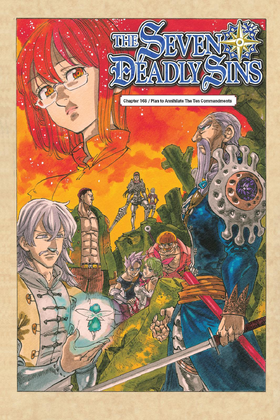 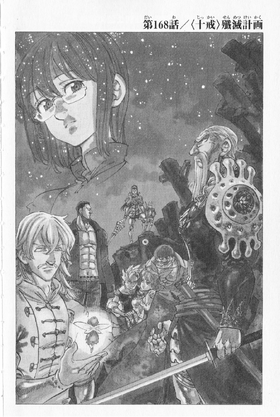 Plan to Annihilate The Ten Commandments「〈十戒〉殲滅計画 <Jikkai> Senmetsu Keikaku」 is the 168th chapter of the manga, Nanatsu no Taizai.

A few days before the Great Fight Festival, Guila and a subordinate knight called Nikka are visiting the ruins of the Zeldon's Research Facility. There, they meet with Gustaf, which tells them about a calling from Lord Denzel. Upon their arrival, Denzel informs them about the destruction Fraudrin had caused, such as the destruction of the tower and Deldry severe wounds.

In a cave far from Zeldon, the spirit of the dead keep haunting Fraudrin, who does not inmute, as he destroys them to eat their souls. Grayroad, suggest that he should abandon his current body, but Fraudrin responds that grew attached to that body, so he will keep it for the moment. Also Fraudrin wonders about that despite everyone he killed appeared due to Dead Man Revenge effect, a certain person did not appear.

Back to Denzel's camp, Gustaf asks if the Ten Commandments are really more menacing than the demonized Hendrickson, to what Denzel responds to by comparing the Great Holy Knight to the Ten Commandments as a whirlwind is to a cataclysmic disaster. Guila adds that they also lost contact with the covert operations units. Deathpierce rebut this, introducing a secret agent of his own, a fairy that only he can see called Invisible. The little fairy brief them about the mass killing in several towns caused by Ten Commandments and the fall of the kingdom of Camelot solely by Zeldris' hand to make it their base, along with the spotting of giant labyrinth at Vaizel, where many people who wanted to participate in the Great Fight Festival vanished. Then Denzel orders Guila to hastily return to the kingdom capital to notify the king and the knights about the existence of a "eleventh" Commandment who should be exterminated, revealing to be Gowther. Guila is taken aback by this, thinking why he would do this. Nikka tries to console her, when Denzel approaches and, seeing through her facade, reveals that the knight was the princess Veronica.

Back to the present at the festival, Gowther and Jericho are pitted against Escanor and Hawk. Gowther express his wish of gaining a heart, claiming that he would do anything to have feelings, even killing his own friends.

Q156. PN Koufu-san (From Osaka): What's the one thing Sir Hendrickson has always wished Sir Dreyfus would change about himself for his sake?

Nakaba: Whenever they're drinking together, he drinks too much ale and ends up hurling all back up.

Retrieved from "https://nanatsu-no-taizai.fandom.com/wiki/Chapter_168?oldid=105022"
Community content is available under CC-BY-SA unless otherwise noted.