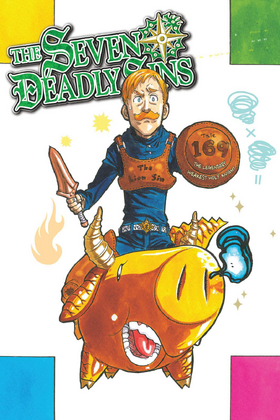 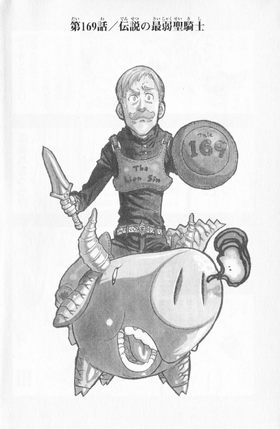 The Legendary Weakest Holy Knight「伝説の最弱聖騎士 Densetsu no Saijaku Seikishi」 is the 169th chapter of the manga, Nanatsu no Taizai.

As the fight against Escanor and Hawk begins, Jericho is angry at the fact that Gowther does not care about killing his own companions to achieve what he wants. Meanwhile, Hawk is confident of their victory, but Escanor does not want to fight his friend to death and asks Drole and Gloxinia to change the rules. They refuse, forcing Escanor to fight.

Gowther keep on going pissing Jericho, who tries to attack Gowther but is defeated by a single kick. Hawk get angry by this and attacks him, but loses easily as well. After ascertaining how weak Escanor is, Gowther controls Escanor's body using his magic and makes it go up to him. Then Gowther proceeds to use Nightmare Teller on the Lion's Sin.

Escanor then has visions about his past. He sees himself as a baby, carried by his parents. He rememorates how after broking the arm of his bullying brother, everyone considered him a cursed monster and turned against him, even to the point of wanting him dead, with the exception of Rosa, a mysterious woman who saved him. Escanor also get memories from his first meeting with Merlin, whom he loved at first sight, and Meliodas. Gowther then disturbs his memories, causing Merlin to say that she wil not walk with someone with no future, remarking that he carries a curse that will destroy his body, dying unloved and alone.

Gowther believes that Escanor's mind is shattered. However, Escanor claims that he is fine with those words, but saying that when he was in absolute darkness, Merlin always was there to illuminate his lifepath, as a "sun" would do. This "sun" actually allows him to be able to pseudo-transform during night.

Q157. PN Stressman (From Shiga-Perfecture): Apart from being a mangaka, what other jobs did you want to have?

Nakaba: Ever since I was in kindergarten, being a mangaka was my sole purpose in life.

The Last Page of Chapter 169

Retrieved from "https://nanatsu-no-taizai.fandom.com/wiki/Chapter_169?oldid=149683"
Community content is available under CC-BY-SA unless otherwise noted.