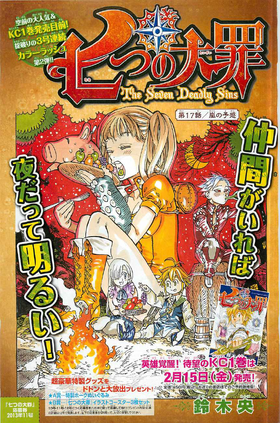 Storm's Brewing「嵐の予感 Arashi no Yokan」 is the 17th chapter of the manga, Nanatsu no Taizai.

During their journey toward Capital of the Dead, after leaving Dalmary Town, the group is confronted by two Holy Knights, Andre and his partner. Initially deceived, they soon realize Meliodas to be one of the Seven Deadly Sins, but are then killed by the sudden appearance of Oslo. After the Black Hound grows huge due to Ban's threats, Meliodas successfully intimidates the creature with his sword's unexplained abilities. Meanwhile, King is then revealed to be engaged in a temporary alliance with the Holy Knights, during his and Gilthunder's conversation.

Retrieved from "https://nanatsu-no-taizai.fandom.com/wiki/Chapter_17?oldid=122020"
Community content is available under CC-BY-SA unless otherwise noted.