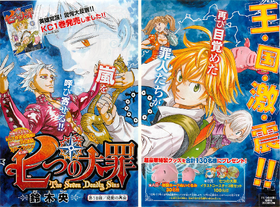 A Touching Reunion「感動の再会 Kandō no Saikai」 is the 18th chapter of the manga, Nanatsu no Taizai.

Gradually, the group arrives at a lonely village that is said to be closest village to the Capital of the Dead. They begin planning to earn money for food, so Meliodas decides to open the Boar Hat. He then reveals that Ban is actually a good chef, and when everyone is about to begin working, they discover that Ban had run away. Elsewhere in the village, Ban discovers a young girl named Ellen who falls unconscious due to hunger. Back at the Boar Hat, Meliodas tells a past story about Ban and King. Seeing that Ellen had fallen asleep, Ban decides to wake her up, when her brother suddenly appears. Without knowing the entire situation, the young boy stabs Ban with a pitchfork, before Ellen stops and explains to him of the situation. Suddenly, King appears in front of Ban and pierces a spear through his chest.

Retrieved from "https://nanatsu-no-taizai.fandom.com/wiki/Chapter_18?oldid=122041"
Community content is available under CC-BY-SA unless otherwise noted.