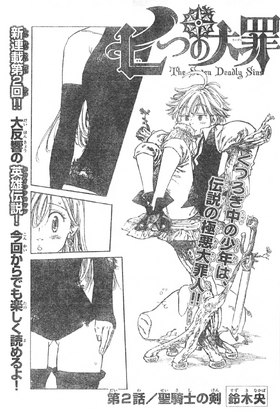 2
The Holy Knight's Sword「聖騎士の剣, Seikishi no Ken」 is the 2nd chapter of the manga, Nanatsu no Taizai.

Meliodas, Hawk and Elizabeth arrive at the village of Bernia, whose underground water source was recently sealed by a Holy Knight named Gilthunder, thus preventing the village from making the Bernia ale, which was their prime source of income, and giving another example of the Holy Knights' heartlessness and cruelty. After innumerable unsuccessful attempts of the villagers to remove the sword with which the source was blocked, Meliodas easily removes the object.

At the Boar Hat, Elizabeth is extremely happy for finally finding a member of the Seven Deadly Sins and officially introduces herself to Meliodas. Elizabeth is hired as the bar's waitress, and is given a "uniform". She then asks him as to why he was labelled a criminal, and that it must have been a misunderstanding. He initially responds to the question by joking, but leaves it unanswered and ambiguous. Just then, they arrive at the village of Bernia, which is famous for its ale and the grout that grows along the village's famous river; they, however, find the river completely dried and the grout wilted.

Meliodas, Elizabeth and Hawk soon find many men trying to pull out a sword, and discover that the previous day, a Holy Knight had sealed the river's underground water supply, preventing the grout from growing and the creation of Bernia ale, the the town's top primary sources of income. While the men unsuccessfully try to pull out the sword, something that can only be done by an individual with the power of a Holy Knight, a boy named Mead started boasting that he had a friend from the Seven Deadly Sins and that the sword was "nothing", which only served to anger and annoy the villagers, who began blaming Mead for their crisis, with some children even throwing stones at him.

Stopping the stones from falling on the boy, Meliodas takes him to Boar Hat and feeds him in return for information on his "friend" from the Seven Deadly Sins. Elizabeth, trying to ask him as to why he angered the Holy Knight, tells him a story of her past: since she was adopted, she had once climbed a tree to get her father, Bartra Liones's attention. That made him very frightened, and he tried to save her, only to fall down himself and get injured. After hearing that, Mead answers that he was angered and put a bug into the Holy Knight's drink since the latter had insulted his previous drink of the Bernia ale, calling it slightly better than "a horse's urine". The four then watch from the window as two knights inform the villagers that if they do not pull out the sword by that day, their taxes will be multiplied by ten times.

While the citizens start throwing the blame of that on Mead, the village head scolds everyone, telling them that the boy's actions were representative of their own true feelings. All the men, including Mead, once again try to unsuccessfully remove the sword, but fail no matter how hard they try, and collapse due to exhaustion. Meliodas, taking two cups Bernia ale that the aforementioned two knights were drinking while entertaining themselves by the villagers working very hard to remove the sword, drinks it. Saying that since he does not have money to pay for the ale, he would repay it by removing the Holy Knight's sword, he easily does so, which causes the dammed water to gush up like a fountain.

Afterwards, all the villagers of Bernia together apologize to Mead for behaving hostilely. Though he refuses to accept the apology, he runs toward them while crying with happiness with a small push by Meliodas. Gilthunder, who sealed the water source, is later seen informed about his sword being removed by a child in Fort Solgales.