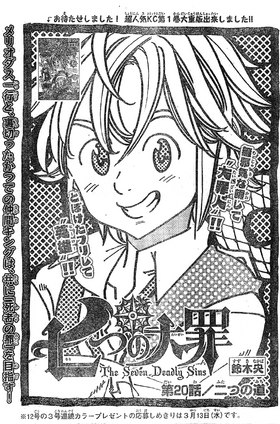 Two Paths「二つの道 Futatsu no Michi」 is the 20th chapter of the manga, Nanatsu no Taizai.

The group continues to discuss about the Capital of the Dead and they are told that the village is actually the entrance to the Capital of the Dead. However, people cannot go there just because they desire to. Ellen then recites a riddle she always heard from her neighbor, "a priceless memory shared with the deceased will open the path to the capital". Ban thanks her, and they begin searching for a method to enter the Capital of the Dead. Meanwhile, King expresses his affection for Diane and that he only hates Ban, and calls him a scoundrel. Realizing that there are flowers on the ground, Hawk begins sniffing them when a sudden breeze wafts all of the petals. When they opens their eyes, they discover that they are now at the Capital of the Dead. Ban then notices a faint figure of a girl and decides to chase it, causing King to follow after him. At the same time, a mysterious female Holy Knight appears before Ellen and her brother.

Retrieved from "https://nanatsu-no-taizai.fandom.com/wiki/Chapter_20?oldid=122106"
Community content is available under CC-BY-SA unless otherwise noted.