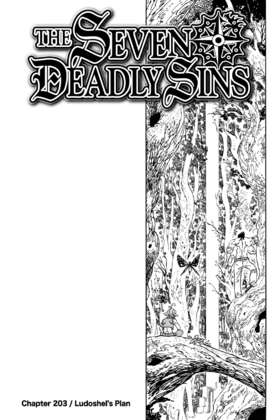 While everyone is resting in the headquarters of Stigma, Elizabeth confronts Ludociel and Nerobasta about the former's plan to exterminate the Demon Clan, to which she does not agree. In the meanwhile King meets a younger version of Gerheade. Discussing with her the magic he feels from the deep of the forest, he discover that Ludociel has set up a living bait for the demons, composed by a moltitude of their brethren. And the bait has worked: an army of demons is approaching the Fairy King's Forest, led by at least five of the Ten Commandments.

After the fight at the Valley of Fossils, Meliodas has a chat with Rou. The human noticed that Meliodas is a member of the Demon Clan, but says he does not care because he is a good person.

At the center of Stigma's headquarter Elizabeth confronts Ludociel and Nerobasta about the Archangel's plan to exterminate the demons. Not only she is seeking a peaceful solution to end the war, but she is outraged by Ludociel speaking like that in front of Meliodas. Ludociel stands on his position, stating that the demons has to be destroyed and that Elizabeth should cut ties with Meliodas. After hearing this Elizabeth, enraged, flees the other two Goddesses.

Elsewhere in the Fairy King's Forest, Diane is training with other Giants. In the meanwhile King, while wondering how to finish the trial and return to their real body, meets Gerheade. After discovering she is the little sister of the first Fairy King, he ask her about a mysterious magic power he feels from within the forest. In the beginning Gerheade tries to tell him that it is a barrier put up by Ludociel to help protect the Fairy King's Forest. However that seems to be only the official version: in reality what Ludociel keep in the deep of the forest is a living bait to lure the demons: what seems to be countless of their brethren, kept imprisoned.

The bait put up by Ludociel seems to be indeed worked: an army of demons, led by four of the Ten Commandments (Derieri, Galand, Melascula and Monspeet) along with Demon General Fraudrin, is about to storm over the three clans alliance.

Q193. Akubi-san (From Kanagawa Prefecture): Is Elaine considered a young lady among the Fairy Clan?

Nakaba: The fairies' appearances don't change much, but she's considered a great fairy of high status.

The Last Page of Chapter 203