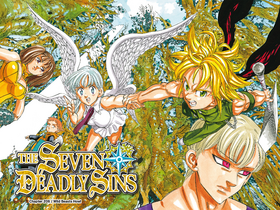 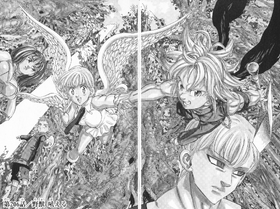 While Nerobasta leads Gowther to the gate to the Celestial Realm, Ludociel joins Tarmiel and Sariel on the battlefield. The Nerobasta speaks of Ludociel's strength and conviction, and Gowther notes the situation is not to their advantage.

Nerobasta leads Gowther towards the gate to the Celestial Realm, while speaking of Ludociel. She explains that for the sake of defeating the Demons, and thus conquering Britannia's abundance of magical energy, Ludociel abandoned his family and friends. Gowther then replies that he too knows a similar man.

The two are than joined by Melascula, who explains to Gowther the seemingly dire situation in which is: the rescue of the captured demons failed, the arrival of Tarmiel and Sariel marked the annihilation of most of the army and with Ludociel joining the battelfield the fate of the Ten Commandments seems to be sealed.

However, Monspeet and Derieri take action to prevent their and their bretheren annihilation. They each sacrifice six of their heart to use a forbidden technique allowed only to the choosen one, forbidden even to most of the Ten Commandaments: the Indura Transformation, sacrificing their original forms and sense of reason for great power.

Q197. Ayumi-san (From Osaka Prefecture): Is the majority of the Goddess Clan females?

Nakaba: There are males as well.

The Last Page of Chapter 206