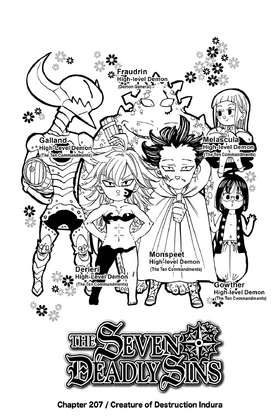 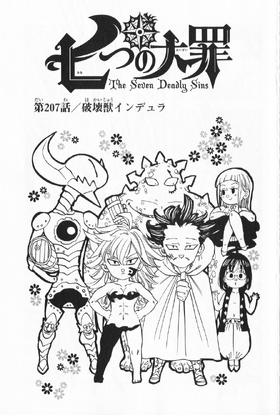 Indura, Creature of Destruction「破壊獣インデュラ Hakai-jū Indyura」 is the 207th chapter of the manga, Nanatsu no Taizai.

Thanks to the Indura Transformation, Derieri and Monspeet are able to gain the upper hand in their fight with the Four Archangels, inflicting heavy damages to Sariel and Tarmiel while apparently avoiding any visible damage.

In the meanwhile Meliodas, King/Gloxinia and Diane/Drole find an unconscious Elizabeth. As soon as she regains consciousness, she apologize to Meliodas for not being able to stop Ludociel's plan and then flies to the battlefield to confront herself the two demons.

Their choice gives however the expected result. Derieri is able to land multiple hit on Ludociel while taking two of his Ark spells without any visible damage, and Monspeet severly injuries both Tarmiel and Sariel with a single spell.

In the meanwhile Meliodas, Diane, and King approaches the battlefield and in their way they find Elizabeth. Meliodas lifts her from the barrier, despite it hurting him, and she soon regain consciousness. She then begins crying, for her powerlessness and lack of knowledge about the situation. Meliodas tries to reassure her, stating that he will think of something to resolve the situation, but Elizabeth flies away saying that she won't stand Meliodas keeping being hurt. She than joins the battle, ordering Ludociel to stand down and that she will handle the situation.

Retrieved from "https://nanatsu-no-taizai.fandom.com/wiki/Chapter_207?oldid=134196"
Community content is available under CC-BY-SA unless otherwise noted.