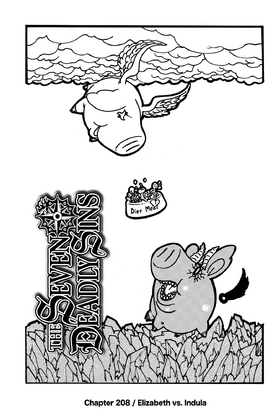 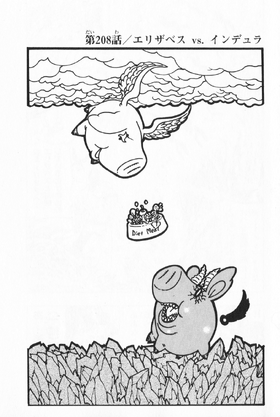 Meliodas, together with King (as Gloxinia) and Diane (as Drole) arrives on the battlefield, and the demon explains what the Indura are, and that now both Monspeet and Derieri will fight until their life is consumed.

Ludociel tries to have Elizabeth help him killing the two demons, but Elizabeth cast a spell to drive the darkness away from the demons and save them.

While the two demons become more fiendish-looking, as the darknes within them tries to rise and fight Elizabeth's light, Ludociel orders Sariel and Tarmiel to help him and tries to kill the two.

However Meliodas step in and stops him, while Elizabeth convinces the other two Archangel to save Monspeet and Derieri. The powers of the three goddesses droves the darkness from the two demons bodies, thus saving them.

Meliodas, King and Diane arrives on the battlefield where Elizabeth is fighting Monspeet and Derieri. Seeing the Ten Commandments in their new form Diane asks Meliodas who they are. Meliodas explains what the Indura are, stating that now the fate of the two demons is to fight until their life is consumed. Also, waiting their death is the only thing that can be done to stop them.

Ludociel, seeing Elizabeth, asks her to combine their powers to destroy the two demons, but Elizabeth says that her goal is to save them. She then casts a powerful light spell, aiming to drove away the darkness from Derieri and Monspeet. Ludociel tries to convince her that the two demons has to be destroyed to ensure the victory in the war, and thus save all the other races from annihilation. Elizabeth ignores him, keeping her spell on while Monspeet and Derieri becomes even more fiendish-looking, as the darknes within them tries to resist the spell.

Ludociel then orders Tarmiel and Sariel to help him in killing the two demons while they are fighting Elizabeth's power, but Meliodas steps in to stop him. The two Archangels tries, like Ludociel, that the two demons are not worthy to be saved, at which Elizabeth asks who is that decides who is worthy of salvation. Her words prompts Tarmiel and Sariel to use their power to help Elizabeth saving Monspeet and Derieri, even if Ludociel tells her that "that person" would not forgive her. The three goddesses, together are able to save the demons from their fate.

Q199. Chris-san (From Tokyo): What kind of smartphone do you use, Nakaba-sensei?

Nakaba: Since the day I was born, even after 40 years, I still yet have to own or even use one. Since I've come this far, I'm going to stick to my guns for the rest of my life.

The Last Page of Chapter 208