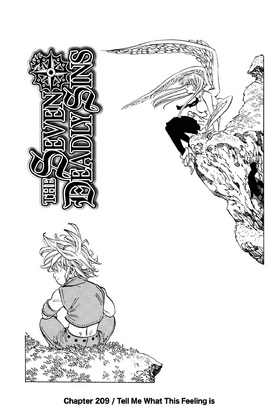 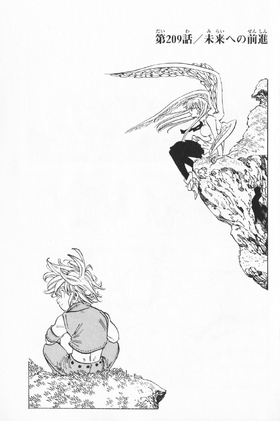 Into the Future「未来への前進, Mirai e no Zenshin」 is the 209th chapter of the manga, Nanatsu no Taizai.

While Elizabeth collapses from the exhaustion for casting such a huge spell, Ludociel still tries to kill Monspeet and Derieri. He is stopped by Diane and King, the giant because she thinks that killing unconscious enemies is unfair and the fairy because he did not want to trample on Elizabeths actions.

Meliodas thanks both of them, as well as Tarmiel and Sariel, reassuring King that even if the two demons will try to take his life he will deal with them.

After saving Monspeet and Derieri from their Indura transformation, Elizabeth collapses from the fatigue. Ludociel tries to take advantage of her condition to kill the two demons, but he is stopped by Diane and King in the body of their ancestors. Diane did this because she deemed unfair to take on unconscious enemies. King, while admitting that in a war there is no concept of fairness, did not want to trample on Elizabeths efforts.

Meliodas thanks the two, and thanks also Tarmiel and Sariel, who responds that they helped Elizabeth not because they feel like saving the two demons, but simply because they are her allies. King asks Meliodas if he is okay with the two demons being alive, since they will probably still want to take his head, at which Meliodas answers that when they will try to kill him he will think of a way to deal with them.

The Last Page of Chapter 209