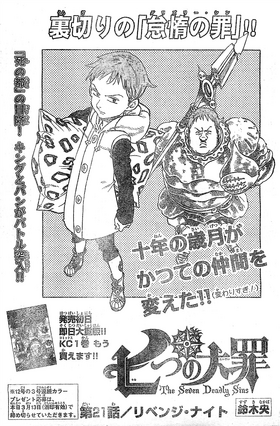 Revenge Knight「リベンジ・ナイト Ribenji • Naito」 is the 21st chapter of the manga, Nanatsu no Taizai.

The mysterious Holy Knight begins torturing Ellen and her brother by strangling them, for information. Realizing that Ellen is in danger, her brother decides to tell the Holy Knight the riddle, which she could not understand. Afterwards, she pierces herself and commits suicide in order to enter the Capital of the Dead. At the Capital of the Dead, the characters continue following Ban and King, who begins fighting against each other. King reveals what happened ten years ago after the incident, and that he lost track of his old family and friends. More importantly, he discovered that a bandit had stolen the hidden treasure, Fountain of Youth, and had killed the Guardian Saint who was his sister. King continues attacking by utilizing his pillow that is shown to be a Sacred Treasure. Meanwhile, the mysterious Holy Knight appears before Meliodas and his group after dying and entering the Capital of the Dead.

Retrieved from "https://nanatsu-no-taizai.fandom.com/wiki/Chapter_21?oldid=122180"
Community content is available under CC-BY-SA unless otherwise noted.