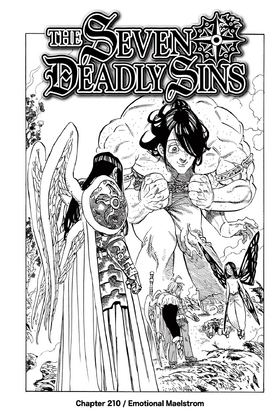 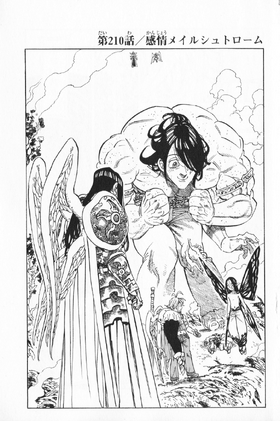 Thanks to Ludociel's voice, Nerobasta breaks free from Gowther mind control. Seeing Melascula and Gowther near the gate to Heaven, and corrupting it to lead to the Underworld instead, she calls to the warriors of Stigma still present in the Fairy King's Forest.

While they move to go and help the Goddess, the warrior of the various race are attacked and killed by the humans, lead by Rou. Rou explains then their betrayal, telling the member of the other races that their goal in joining Stigma was to kill every member of Stigma itself.

Sensing that something is wrong King and Diane run back to Stigma's headquarted, but they are intercepted on their way back by Gowther.

Ludociel telepathically calls Nerobasta, asking her to call reinforcements. His voice manages to break her mind free from Gowther's control, and then she see his and Melascula's doing: the two Ten Commandments are corrupting the gate to the Heaven to connect it to the Underworld.

Gerheade in the meanwhile is listening to the Stigma army speaking about the end of the war, and the massacre of the demons enacted by Ludociel earlier, somewhat troubled. While Rou tries to comfort her, Nerobasta contacts all the warriors of Stigma and orders them to go to the Light of Grace to fight off Gowther and Melascula.

The warriors of all races moves to obey her, but then the humans, lead by Rou himself, take action by killing their fellow warrior of the other races. Rou then explains that their goal, since the beginning, was to kill every member of Stigma.

Following the betrayal of the humans, King and Diane sense that something is off, and leave the battlefield to come go to the Fairy King's Forest, leaving Meliodas to protect Elizabeth On their way back, while King thinks in regret about his distrust for Meliodas only because of his race, they are intercepted by Gowther.

The Last Page of Chapter 210