He Who Says Goodbye 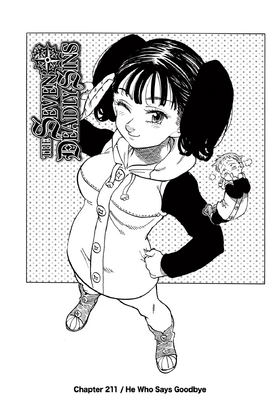 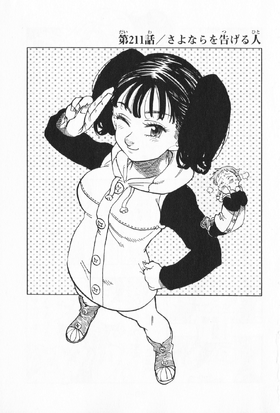 He Who Says Goodbye「さよならを告げる人, Sayonara wo Tsugeru Hito」 is the 211th chapter of the manga, Nanatsu no Taizai.

As King and Diane speak with Gowther, discovering his affiliation with the Ten Commandments, warriors of every race continue dying in their internal fight at the Light of Grace. Diane and King try to reach the Light of Grace, but they are again stopped by Gowther.

Meanwhile, Melascula finishes corrupting the Door to Heaven. She was, however, being manipulated by Gowther, and the corruption does not go as she planned: instead of the Demon Realm, the door now connects to its prison.

From the door, a demon leaves the prison: it is the real Gowther, who was imprisoned for five hundred years after being bestowed the Commandment of Selflessness by the Demon King. He planned his escape after hearing of the plan to rescue the captive Demons, and used Melascula to achieve his goal.

Gowther asks King what he meant when he said that he was not Gowther, but the idle chat is interrupted by Melascula. Seeing the Demon, King and Diane ask Gowther why he is with the Ten Commandments, and he responds that he is one of them.

Diane, sensing more and more magic powers from the Light of Grace disappearing, tries to prompt King into reaching the Stigma headquarters, but they are again stopped by Gowther, who tries to use Invasion on Diane. King explains the power of Invasion to Diane, and tells her that Gowther himself is the one who erased her memories. While the two explain to Gowther that they come from the future, Melascula completes the corruption of the Door to Heaven.

Her plan, however, does not go as intended: the corrupted door does not lead to the Underworld but instead to the Prison of the Demon World. She then realizes that she was being manipulated by Gowther and screams in rage, but she is silenced by someone passing through the door. It is the true Commandment of Selflessness, Gowther, who was imprisoned five hundreds years after the Demon King bestowed him with his commandment. He then created a puppet to interact with the outside world, and plotted his escape from the prison when he heard of the plan to rescue the captive Demons. The chapter ends with him saying that he has to say his farewell to the world.

Q201: Sakurai-san: Are the wings the only things King hasn't grown?

Nakaba: This is something you shouldn't ask. (laughs)

Q202: Hat of the boar-san: (Kagawa Prefecture): Is the ability to change Gowther's figure magic?

Nakaba: The functionality has been built in Gowther from the start.

The Last Page of Chapter 211