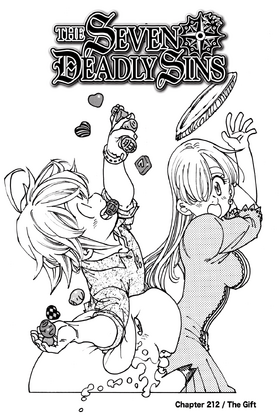 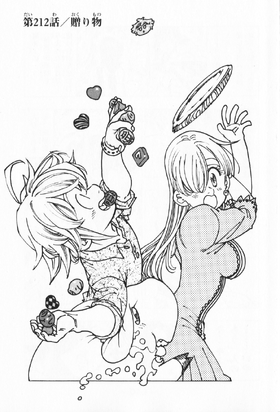 The Gift「贈り物, Okurimono」 is the 212th chapter of the manga, Nanatsu no Taizai.

Freed from the Demon Realm's prison, Gowther appears before King and Diane. He then disengages the synchronization with his doll, stopping it from copying his movements and words. He starts explaining to the fairies and giants kings how he used the doll in the past centuries, but King stops him and asks what the demon meant when he said that they could not get near the gate.

This propmpts Gowther to explain about the rebellion of their human allies, or former so, how they used the demons as sacrifices to win the Stigma warrior trust. Kings accuses him to have done the same, sacrificing many lives for his own freedom, and leaves for the Light of Grace while the demon says that he done all not for his own freedom but to end the war. King prompts Diane to hurry to the Light of Grace, but the giantess states that she wants to talk to Gowther before she follows him. With a smile on his face, King leaves.

After the Fairy King's departure, Gowther asks Diane if they were lovers. He thinks that because of the amount of trust that the two seems to have for one another, and because they were not affected by his commandment. He than says that if the clan could get along as well as King and Diane does, the Holy War would have never happened. After this statement Diane asks if he was serious about being able to end the war. Gowther answers that, given that he is correct in what he is thinking, he is positive on being able to do that, and after being informed by Diane of the end of the Holy War he says that then his death will not be in vain.

Hearing him speaking of his death Diane asks what will be of the doll after he dies. To answer her question Gowther awakens the doll and tells it that he will have to live on his own. Then, after explaining that it is not an ordinary doll - due to the magic heart he created and implanted in its chest - Gowther asks Diane to be friend with the doll, and guide it on the right path if he should stray from it. After Diane promises to do that Gowther asks the doll to fulfill the dream he could not, and then prepares to give a parting gift to the giantess.

In the meanwhile King flies towards the Light of Grace, thinking about not being able to save his sister and hoping to get there in time to save Gerheade. But when he enters the Fairy King's Forest he sees an horrifying scene: Rou holding with a sinister smile the bloody corpse of Gerheade, her wings and right leg ripped of.

Q218. Boar's Hat-san (From Kagawa Prefecture): Could someone from another clan become one of the Ten Commandments if they tried?

Nakaba: The Ten Commandments must first be recognized by the Demon King before their commandments are bestowed upon them.

The Last Page of Chapter 212