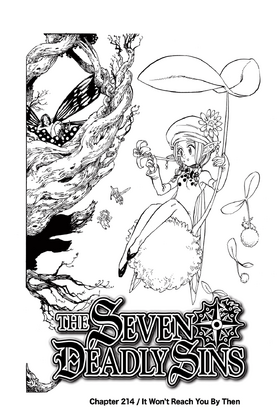 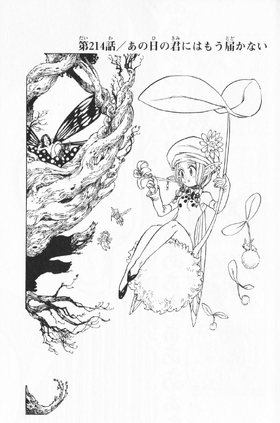 The Unreachable Past「あの日の君にはもう届かない Ano Hi no Kimi ni wa mou Todokanai」 is the 214th chapter of the manga, Nanatsu no Taizai.

King prepares to kill Rou, but the Fairy King remembers of Ban. The human has on his face the same look Ban had at the Capital of the Dead, and King realizes that Rou, like Ban, taunted him only to have the Fairy King kill him. King tries to hold Basquias, but his efforts are for naught: beside him appeares an enraged Gloxinia, and Rou is killed.

Right after that King awakens in his own body, his trial ended. Gloxinia explains to him that, after he killed Rou, he directed his rage towards Stigma, and then joined the Demon Clan's army. He than asks King why he choose to spare Rou, and King explains that he was not true evil, but only had his own circumstances.

In the meanwhile Diane is still trapped in Drole's body, chatting with both Gowthers. They are soon joined by someone who emerged from the Door to the Underworld, someone with great magic power as well as killing intent: the Executioner, Zeldris.

As King prepares to strike with Basquias, Rou let Gerheade slide to the ground and bids her goodbye. The human then prompts his opponent to kill him. Enraged by the mutiladed body of Gerheade King launches his attack, but the smirk on Rou's face have him remember Ban and the time he petrified him in the Capital of the Dead. Remembering Elaine's words on how Ban tried to taunted him to have King kill him, the Fairy King holds back the sacred spear, saying that he can't kill Rou. History cannot, however, be changed so easily. As soon as King lays eyes on Rou, he sees only his lower half, the rest blown away by an enraged Gloxinia who stands, his face twisted by anger, right beside him.

This prompts the trial to end, and King awakens in his own body. Beside him stands, again, Gloxinia, levitating midair and curled on himself. The first Fairy King explains that he lost control of himself when he saw his sister, killed Rou and then directed his rage towards Stigma, who could not protect his sister and his fellow Fairy. Without bothering to check whether Gerheade was alive or not, he joined the ranks of the Demon Clan and fought the rest of the war as one of the Ten Commandments. King tries to compare themself with Gloxinia, thinking about his anger with Ban. Gloxinia than asks him why he choose not to kill Rou, and King explains that Rou, as many of the enemies he fought, was not true good or evil, and has his own circumstances to do what he did.

Gloxinia then explains that the Holy War he witnessed was the real thing and not an illusion. Since it was the real war, as soon as King made a different choice than Gloxinia and tried to "alter history" he was sent back. That also means not only that if King was killed during the trial he would have died for real, but also that if he did the same choice Gloxinia did he could have been trapped in the Fairy King's past forever. He than states that King surely gained much knowledge from this trial, and while King says that he effectively learned how to draw the full potential out of the spirit spears, his back begins to ache.

In the meanwyle Diane is still in the past, chatting with the two Gowthers. The demon states again that he intends to stop the holy war. Soon the three senses an huge amount of magic power, together with an incredible killing intent, oozing from the Light of Grace. From the Door to the Prison of the Underworld a figure emerges, heading quickly towards the escapee. It is the Executioner, Zeldris!

Q220. Nekotomo-san (From Kagawa Prefecture): Is Gloxinia's aesthetic sense anything like King's?

Retrieved from "https://nanatsu-no-taizai.fandom.com/wiki/Chapter_214?oldid=137533"
Community content is available under CC-BY-SA unless otherwise noted.