Nanatsu no Taizai Wiki
Register
Don't have an account?
Sign In
Advertisement
in: Chapters, Memories of the Holy War arc, Volume 27 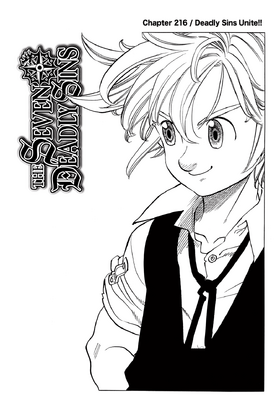 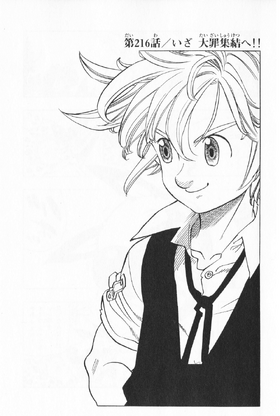 King wakes up after fainting from the shock of being kissed by Diane, convinced that it was all a dream. Beside him is Diane herself, who assures him it was not a dream: she then reveal that Gowther restored her memories from two hundreds years ago. She then asks if King's back is alright, and he realizes that two butterfly-like wings, albeit extremely tiny, are sprouting from his back.

King then realizes they are in the Fairy King's Forest, and asks where Gloxinia is. The first Fairy King is reunited whit his sister Gerheade, asking for forgivness for killing Rou and not checking if Gerheade was alive. The two are interrupted by Oslo who begins to growl at Gloxinia as soon as he saw him. After hearing that Oslo was born right after he left the forest, Gloxinia realizes that the black hound is the reincarnation of Rou, reborn to protect Gerheade.

The chapter ends with King and Diane going back to the Kingdom of Liones, and reunite with the other members of the Seven Deadly Sins in the exact same place they were framed years prior.

After fainting from being kissed by Diane, King is waken up by Oslo. At first he believes that the kiss was all part of a dream, but a nearby Diane confirms to him that it really happened. Dumbfounded, King asks her why she kissed him, and the giantess answers that it was thanks for keeping their two hundred year old promise. She then explains that Gowther gave back her memories, as a parting gift. After that, Diane and King kiss again.

After the kiss Diane asks King if his back is alright. After turning to look at his own back, King notices two little butterfly-like wings sprouting from his body. He is initially happy of this, but remembering Gloxinia's wings - much larger than his own - he gets depressed. Diane comforts him, assuring that Gloxinia himself said that wings initially are this little.

Hearing Diane speaking about Gloxinia, King recognizes the place they are in as the Fairy King's Forest, and asks where the first Fairy King is. Diane leads him to Gloxinia, who is finally reunited with his sister. The two are hugging, and Gloxinia is apologizing to her for killing Rou and not checking if Gerheade herself was still alive.

The two are interrupted by Oslo who, seeing Gloxinia, grows and growls to the first Fairy King, threathening him. Gerheade manages to calm the beast, and tells Gloxinia that it was born after he left the forest, and protected her since then. Seeing the two together, Gloxinia remembers the last word he heard from Rou - his promise to Gerheade protect her if he was born again - and realizes that Oslo is Rou's reincarnation. Then, after Diane and King decide to go back to the Kingdom of Liones, he swears to protect the Fairy King's Forest in King's stead.

The two arrives at the tower where the Seven Deadly Sins, years prior, discovered Zaratras' body. Here they find their five companions, reunited by Merlin after Bartra foresaw their reunion under a moon that shines in broad daylight.

Q222. Na-chan (From Ōita Prefecture): Did Howzer have any romantic feelings for Diane?

Nakaba: Not exactly romantic... More like, "This girl is really cute... I can't get her out of my mind..." kind of feelings. Hrmm... I guess that kinda counts as romance too, doesn't it?

The Last Page of Chapter 216