Nanatsu no Taizai Wiki
Register
Don't have an account?
Sign In
Advertisement
in: Chapters, Volume 27, Memories of the Holy War arc

Where the Heart Is 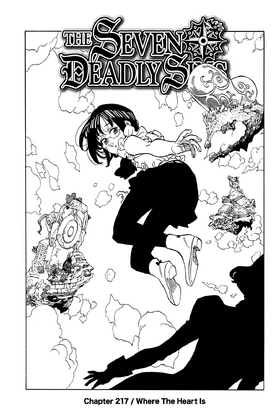 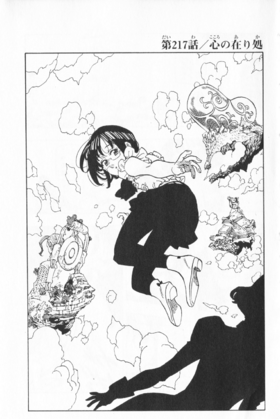 Where the Heart Is「心の在り処, Kokoro no Arika」 is the 217th chapter of the manga, Nanatsu no Taizai.

Seeing her comrades, Diane cries of joy. Her tears however are mixed with tears of sorrow, for the death of Meliodas. The Captain of the Seven Deadly Sins, however, is alive and fine, albeit crushed under the giantess's butt.

Initially Diane and King scream of fear, thinking they are seeing a ghost, but they are soon reassured that Meliodas is alive. King than bows both to his Captain and to Ban, asking for forgiveness for misunderstanding and mistrusting them. The two ignore his apologies, instead making fun of his tiny wings.

Meliodas than notes that something is different in Diane, and the giantess explains that her memories came back. She than reveals to have met Gowther's father, and states her intention to fulfill her promise to him and find Gowther's heart.

This surprises the Seven Deadly Sins, but both Merlin and King Bartra explains that Gowther once had emotions, due to a magic heart placed in his chest. Bartra than shows the heart itself. Seeing the heart, memories of Nadja Liones pops in Gowther's head, and the doll jumps down the tower.

The remaining Sins follow him, but due to him being a doll and not having a presence finding him is a difficult task. Diane find him near Liones' castle, and manages to stop him by a hair's breadth before he could completely erase his own memories.

Arrived at Liones, Diane and King are welcomed by their companions. Seeing them Diane sheds tears bot of joy for being reunited again, and sorrow for the death of Meliodas. From under Diane's butt, Meliodas reveals that he's alive. The two are then shocked to hear the voice of their Captain. The two scream in fear, thinking that the Meliodas they see is a ghost... and hiding Bartra's word, as the king tries to make his entrance.

After being reassured that Meliodas is indeed alive, King confronts him and Ban, asking for forgiveness for how he misunderstood and loathed the two. But Ban and Meliodas seemingly ignore his word, being more interested in making fun of him for having sprouted such tiny wings. Only Diane manages to calm down King, pointing out that both Ban and Meliodas are happy for his new wings. Meliodas than states that he notices something different from them. King mistakingly thinks that he refers to their new relationship, but Meliodas is talking specifically of Diane.

The giantess admit that her memories came back, much to Gowther's and Merlin's surprise. Gowther states that purged memories cannot come back, but Diane says that precious memories never disappears. She then states that those word were from Gowther's father, and that to fulfill the promise she made with him she intends to find Gowther's lost heart.

The Seven Deadly Sins, included Gowther, are surprised by this and Merlin explains that Gowther once had emotions within him. At last Bartra, interrupted again by Merlin, manages to make his appearance and explains that Gowther had a magic heart in his chest. He then shows to Gowther the heart itself, found after much time. Seeing the heart Gowther head is filled by memories of Nadja Liones, and he promptly escapes.

After seeing the heart, the Seven Deadly Sins jumps out of the tower to follow Gowther. Unfortunately the doll has no presence, and that makes difficult to find him. Trying to escape from his teammates Gowther reaches the Castle of Liones, and again memories of Nadja pops in his memories. Not knowing what those "malfunctions" are, Gowther decides to use Lost World to completely wipe out his own memories. Before he can do this, however, Diane drop kicks on him, preventing to erase his memories.

Q223. Yuni-san (From Tokyo): Did The Seven Deadly Sins' symbol just come to you? Or did you spend forever trying to come up with it?

Nakaba: Bingo! It just came to me!!

The Last Page of Chapter 217