Nanatsu no Taizai Wiki
Register
Don't have an account?
Sign In
Advertisement
in: Chapters, Volume 27, Memories of the Holy War arc 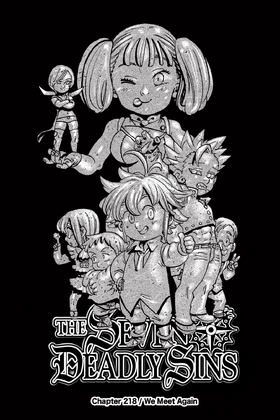 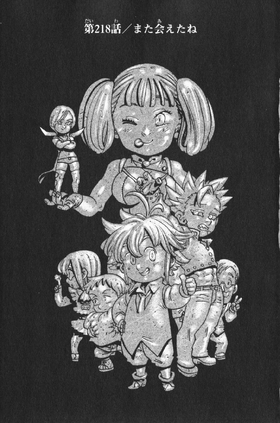 We Meet Again「また会えたね, Mata aeta ne」 is the 218th chapter of the manga, Nanatsu no Taizai.

After being hit by Diane, Gowther begins to shoot at her to have her stop interfere. The giantess, however, uses the battle dance she learned during her trial not only to avoid every single one of Gowther's shots, but also to increase her power. To Gowther dismay, he can sense from here a power of 15000, even in her human size.

The doll decides to escape from her but he is soon after blocked by King, whose power is also much higher than before. To improve his chance of escaping Gowther decides to use a passerby as an hostage, and manages to kidnap a girl. The girl is, however, Veronica, and seeing her face Gowther remembers Nadja's. Once again he tries to erasing his own memories, and once again he is stopped by Diane.

While Diane scolds him for his actions, and Merlin explains how he erased his memories after his failed attempt to save Nadja, Gowther fully regains his memories. With them he ragains also the full extent of his powers.

In the end the four of them are joined by Meliodas, Ban and Escanor, reuniting the Seven Deadly Sins again.

After kicking Gowther to stop him from erasing his own memories, Diane infers that the reason behind this act is that he regained some of his memories. After stating that he wanted to erase the noise in his head, and refusing to acknowledge he ever had an heart at Diane's remark that the "noise" could come from his heart, Gowther begins shooting at Diane. Using Drole's battle dance Diane avoids every shot, and Gowther noticed that while she's dodging her power is increasing too. At the end of the dance Gowther senses a power level exceeding 15,000, and Diane states that it could increase even more if she keeps dancing. Her aim is, however, not to fight him.

After assessing that his chance of winning are as low as 4% Gowther decides to escape, trying to reach a crowded area to prevent Diane from using her power. His path is however blocked by King, whose power is now almost 42,000. Gowther asks if the reason behind that sudden power boost are the tiny wings on his back, much to King's annoyance. The two are then reached by a passerby, and Gowther seizes the opportunity to kidnap her and use her as an hostage to escape. But the passerby is none other than Veronica, and seeing her face close by Gowther suddenly remembers Nadja. This prompts him to try once again to use Lost World on himself, but he is stopped a second time by Diane. He then reveals to have already removed once his memories, and cries in anguish after realizing that his memories of Nadja will not disappear.

While Diane holds him Merlin appears, instructing her to not let go of Gowther hands and explaining his futile attempt to revive Nadja using his magic heart. She also explains that the reason behind his unstable mind is none other that his memories: whenever he starts remembering Nadja his body goes berserk. On the verge of crying Gowther asks to be "broken", but Diane scolds him telling that the other Seven Deadly Sins will be there for him. Her words makes him fully recover his memories of Nadja and Gowther, while Merlin explains that hart magic does not exist, and that the "magic heart" was a charm to confort him. With the return of his memories Gowther also regains the full extent of his powers. Gowther then thanks Diane for having "guided him down the right path".

The four of them are then joined by Meliodas, Ban and Escanor, finally reuniting the Seven Deadly Sins again.

Q224. Yakata-san (From Tochigi Prefecture): Who's the best drinker of all the Sins?

The Last Page of Chapter 218