The Heroes Take a Break 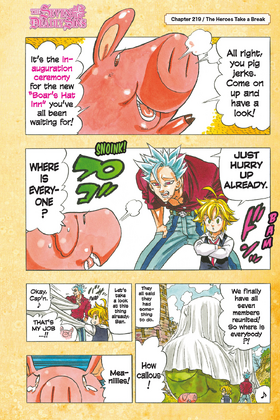 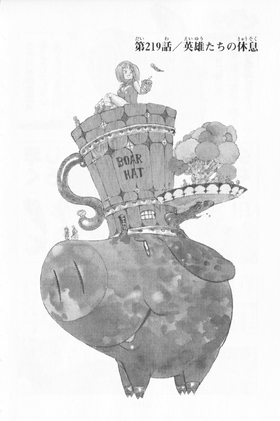 The Heroes Take a Break「英雄たちの休息 Eiyū-tachi no Kyūsoku」 is the 219th chapter of the manga, Nanatsu no Taizai.

Hawk is showing to Ban and Meliodas the new Boar Hat, restructured under King Bartra's patronage. After unveiling the new building the two men rush in, each trying to claim for himself the best room.

Diane and Elizabeth are trying to make a surprise visit to Elaine, but are easily spotted by the the former Maiden. After a brief talk about King and Diane, and Elaine body's condition, Diane tells the other two girls what she saw during the trial: Meliodas, and a girl identical to Elizabeth.

King is in a bar, together with Gowther and Escanor. Drunk, the Fairy King says that he wanted to know better Gowther, then claims that he still have not forgiven Gowther for what he did to Diane. After he collapsed, Gowther reads his mind to assert his true feeling and, together with Escanor, tries to bring King outside the bar. Moving his hand, King makes Escanor's glasses fly away, and the human enters his midday form. The glasses are a magical tool that Merlin gave to him to seal his powers, and only thanks to Gowther's quick reflexes the Lion Sin is is calmed down.

Merlin, using Orlondi as her eyes, is searching for Arthur. The vampire is however caught by Zeldris, who tries to kill Merlin through him using his Hellblaze. Altough severely wounded, Merlin manages to escape death.

An excited Hawk is about to show to Ban and Meliodas the renovated Boar Hat. Already pissed by the absence of the other Seven Deadly Sins at such important moment, Hawk gets even more enraged when Ban and Meliodas pull off the sheet covering the new Boar Hat, usirping what he deemed to be his own job. After unveiling the Boar Hat, restructured under King Bartra's patronage, Meliodas and Ban storm in, each trying to be the first to claim the best room for himself.

Diane and Elizabeth are trying to make a surprise visit to Elaine, but the former Holy Maiden easily spot their presences reading their heart. Elizabeth manages to hide only her thoughts, letting her emotions to be easily read, while Diane's head was fillet with thoughts about King. Elaine jokingly says that she is worried about Diane settling with her brother, and then asks where King is. After answeing that the Fairy King is at a bar with Gowther, Diane asks how Elaine's body is feeling. Being reassured that, thanks to Elizabeth's magic, her body is fine, Diane proceeds to tell what she saw during her trial: Meliodas himself, and someone who was the spitting image of Elizabeth.

King and Gowther are in a bar, together with Escanor. While the doll and the human are sober, King is already drunk. In a talking frenzy, the Fairy King firs says he wanted to know Gowther better, than admits that he still did not forgave Gowther. He then collpases from the alcohol, and Gowther reads his thoughts. Asserting that King still dislikes him, Gowther states his intention to be a good doll, and being liked by his companions. After Escanor assures him that he likes him, the two tries to bring King out of the bar. However King waves his hand, trying to stay and drink more, and makes Escanor's glasses to fly away. This prompts the Lion Sin of Pride to assume his midday form, terrifying Howzer and Griamore, and only Gowther's quick action, putting the glasses back on Escanor's face, saves the day. Those glasses are a creation of Merlin, magical glasses that, while worn, seems to seal his powers.

In the meanwhile Merlin is searchig for Arthur using Orlondi, in a sort of bat/demon form, as her eyes. The vampire is however sensing only the demons magic power, and is unable to locate the king of Camelot. Soon after he is engufled by darkness, and is found by Zeldris. The demon uses his Hellblaze on Orlondi, but his aim is not to kill the vampire - who do not receive any damage - but reaching through him Merlin herself. The sorceress manages to escape death, although is severely wounded.

Q225. Ayu-san (From Osaka): How old was Merlin's body when she stopped aging?

Retrieved from "https://nanatsu-no-taizai.fandom.com/wiki/Chapter_219?oldid=137550"
Community content is available under CC-BY-SA unless otherwise noted.