A Pursuer to Fear 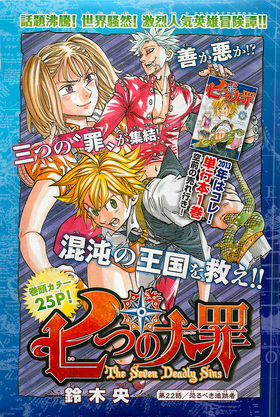 A Pursuer to Fear「恐るべき追跡者 Osorubeki Tsuiseki-sha」 is the 22nd chapter of the manga, Nanatsu no Taizai.

King continues to fight against Ban, and reveals his intentions of turning him into a living statue that will never move again. At the same time, Meliodas and his group encounter Guila, who entered the Capital of the Dead by killing herself. She begins the battle, and Meliodas immediately tells Hawk to run away with Elizabeth after realizing how dangerous she is. Both Diane and Meliodas are easily suppressed by Guila. Meanwhile, Ban is completely turned into a statue after repeating again, "Really, look nothing alike", to King. Nearby, Elaine appears and witnesses the battle.

Retrieved from "https://nanatsu-no-taizai.fandom.com/wiki/Chapter_22?oldid=122254"
Community content is available under CC-BY-SA unless otherwise noted.