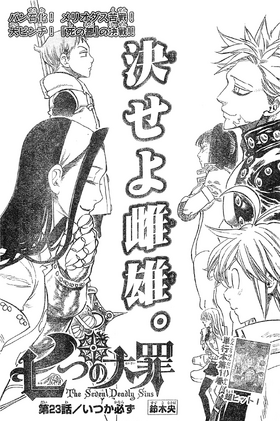 Someday, I Swear「いつか必ず Itsuka Kanarazu」 is the 23rd chapter of the manga, Nanatsu no Taizai.

Ban is completely turned into a living statue by King, who begins to leave whilst believing that he has defeated Ban. Suddenly, Elaine appears before Ban and releases his petrification with a single kiss. Elaine begins chatting with Ban whilst the confused King tries to gain her attention. A subtle explosion occurs faraway, leading Ban to realize that there is a Holy Knight. Before he leaves to join the battle against Guila, he declares "Someday I'll definitely make you mine" to Elaine. Meanwhile, Meliodas and Diane continue their battle against Guila, but are struggling against her ability, Explosion. Just as she is about to strike, Ban appears behind her and stops her movements with a mysterious technique.

Retrieved from "https://nanatsu-no-taizai.fandom.com/wiki/Chapter_23?oldid=122316"
Community content is available under CC-BY-SA unless otherwise noted.