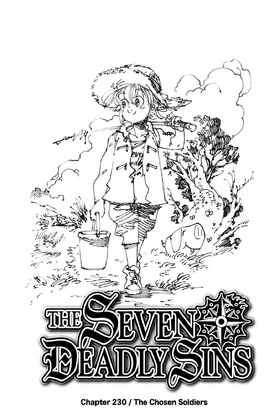 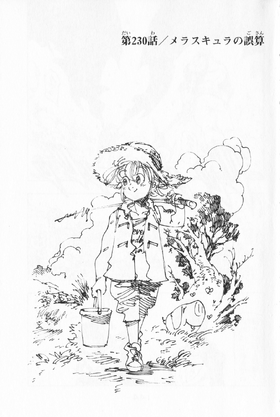 Melascula's Miscalculation「メラスキュラの誤算 Merasukyura no Gosan」 is the 230th chapter of the manga, Nanatsu no Taizai.

Melascula's fight against the Seven Deadly Sins comes to an end thanks to Elizabeth and Elaine's intervention. Melascula gets captured alive by Merlin, averting Elaine's demise. However, Meliodas has gone back to his former self, the feared Ten Commandments' Leader.

Meliodas finally succumbs to his dark power. Elizabeth believes he has gone berserk but Merlin correct her, by telling is different from others time it happened.

Meliodas cries out in pain, as his armor and clothes get ripped by darkness, while Ban observes incapable of helping his best friend. Melascula trembles in fear, declaring is the end for both her and the Seven Deadly Sins due to Meliodas becoming his former self, the one who lead over the Ten Commandments and even feared among demons.

Escanor yells at Merlin and she, understanding the indication, casts a Perfect Cube to lock them up inside. Merlin says Meliodas' current status is the result of him releasing all of his demonic power to break out of Melascula's spell, lamenting that he could not control his emotions. Melascula, now relieved, admits she was worried at first, but concludes that without Meliodas and Escanor's help, she can take on the Seven Deadly Sins on her own.

Ban impulsively throws himself at Melascula trying to rip off her last heart out with Fox Hunt, but he notes that her heart is not where it should. Melascula replies him she can move it wherever she wants in her snake form, before attacking him with Deadly Poison. Elaine tries to help him but Ban warns her to stop. Melascula explains that her digestive vapors are corrosive enough to kill anyone whith just inhaling, as Ban is melted and rotten down to his bones. Elizabeth calmly approachs Ban, much to Melascula's shock who can not believe she was not being affected by her digestive vapors.

Elizabeth neutralize Melascula's poison with Invigorate, healing in an instant the Fox's Sin of Greed as well. Then Diane uses her magic to lure the Commandment of Faith to a direct punch to her surprise, who compares Diane's strenght to Drole's. She is then attacked by King's Bumblebee, which she compares to Gloxinia's magic power. Melascula is dumbfounded for the fact of being beaten down by a Giant and a Fairy. Merlin explain her the moment she used her true form, the outcome of their battle was already decided. Melascula knows she is right and her next option is to retreat from the battlefield.

However, Elaine uses Tempest Falls to corner Melascula to finish her off once for all, even when it would mean her death as well. Gowther takes the chance to jump on her and disconect her nerves to immobilize her. Merlin is unsure so she asks for Elaine's approval. However, Elizabeth uses a Goddess spell called Tranquilize, to expel all off Melascula demonic's miasma and turning her into a tiny snake that runs away from Hawk to end captured by Merlin. Elizabeth reveals that Melascula was in fact a snake that became a demon by bathing in miasma from the Demon Realm for 300 years.

Meanwhile, within the Perfect Cube Escanor looks interested in Meliodas' transformation, who shows a different demeanor, demanding his silence and calling Escanor and impertinent low human, to which Escanor replies he is the impertinent.

Nakaba: It has now been destroyed.

The Last Page of Chapter 230

Retrieved from "https://nanatsu-no-taizai.fandom.com/wiki/Chapter_230?oldid=149752"
Community content is available under CC-BY-SA unless otherwise noted.