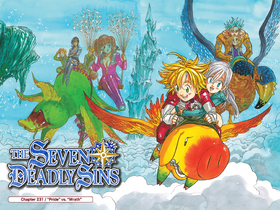 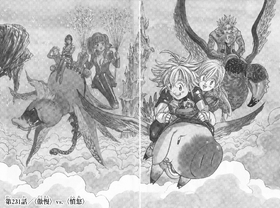 Meliodas and Escanor begin their fight.

Meliodas warns Escanor to watch his tone, claiming he is in a foul mood. Escanor reveals he is in a good mood since he can now prove that he's stronger than Meliodas. He then tells Meliodas to struggle all he wants and seemingly slams down Rhitta on his head. As Hawk squeals about how they've begun, it's revealed that Meliodas stopped the attack with Lostvayne. He scoffs at the idea of a Human beating a Demon and Escanor laughs along before bringing down Rhitta multiple times.

Meliodas jumps up and knees Escanor's face, drawing blood. He then slashes, only for Escanor to block with Rhitta. Intrigued, Meliodas begins spinning to apply more pressure and pushes Escanor back against the Perfect Cube. Escanor then launches at Meliodas and swings Rhitta, only for Meliodas to stab him through the abdomen first. As Escanor coughs up blood, Elizabeth yells for Meliodas to stop.

Escanor grabs Meliodas's head but Meliodas warns him not to touch him before casting Hellblaze through Lostvayne, worsening Escanor's wound and causing him to fall on the ground. Elizabeth tells Merlin to take down her spell so she can dissuade Meliodas but Merlin advises against it, pointing out how Meliodas has let dark forces consume him and his memories and feelings have been corrupted as a result. She adds that if she takes down Perfect Cube, then he'll kill them all.

Hawk questions what they can do and Merlin points out it's almost noon. As the ground bubbles around him, Escanor gets up. Meliodas warns him that if he isn't strong enough, he'll be seeing hell. As his body enlargens, closing his wound, Escanor admits Meliodas is strong. After wiping the blood from his mouth, Escanor asserts that he still isn't as strong as him and invites him to continue. Diane tells King that Escanor in that state is dangerous and King guesses that Escanor may kill Meliodas.

Hawk then measures Escanor's Combat Class to be 114,000. Escanor questions if Meliodas's blank face is because he is shocked at his transformation. Escanor then unleashes Super Slash, swinging Rhitta and seemingly hitting Meliodas. However, Meliodas comes out unscathed and punches Escanor in the chest, forcing Escanor on his knees, much to the surprise of the other Sins. After planting his foot on Escanor's head, Meliodas remarks about how the only thing that changed about Escanor was his tone.

The Last Page of Chapter 231