The Strongest vs. The Most Wicked 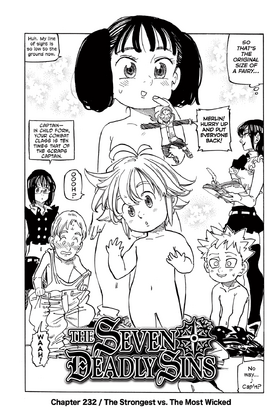 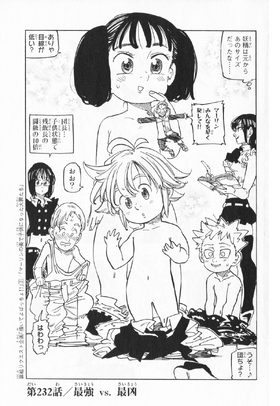 The Strongest vs. The Most Wicked「最強 ｖｓ．最凶, Saikyō vs. Saikyō」 is the 232nd chapter of the manga, Nanatsu no Taizai.

Meliodas and Escanor conclude their fight.

As Meliodas mocks Escanor, Hawk questions if Escanor is really no match for Meliodas. Gowther says that Escanor is the only one who can fight Meliodas right now before measuring Meliodas's Combat Class as 142,000 and claims Escanor will be killed. Diane is surprised Meliodas is just playing around with Escanor despite how strong he is and Merlin asserts that this is when Meliodas was hailed as the scion of the Demon Clan, as Leader of the Ten Commandments.

Gripping Rhitta, Escanor gets up and he exchanges a flurry of blows with Meliodas. Meliodas then catches Rhitta, stopping Escanor. Lifting his other arm, Escanor fires Cruel Sun, only for Meliodas to reflect the attack with Full Counter. Escanor dodges the reflected attack but it hits the side of the Perfect Cube, causing a contained explosion. As she watches, Merlin hears an ominous voice laugh about how there's just one more step.

Escanor tries looking for Meliodas through the smoke, only for Lostvayne to suddenly be thrown at him. Escanor blocks it with Rhitta but Meliodas appears and knees his hand, forcing Escanor to drop the axe. After catching Lostvayne, Meliodas slashes, only for the blade to be stuck in Escanor's side. After pulling it out and throwing the sword away, Escanor punches Meliodas. Meliodas responds by punching Escanor, throwing him around the Perfect Cube.

Looking at Escanor on the ground, Meliodas spits out some blood and laughs about how he had a good time, noting that this is the first time he's had fun in a fight since fighting his little brother. He admits it's a shame he has to kill Escanor. Hawk guesses that this is it but Merlin reveals Escanor's held off Meliodas for long enough and that it now comes down to this one minute.

As Meliodas goes to retrieve Lostvayne, Merlin details how Escanor's power rises along with the sun and reaches its peak at noon. She reveals that at his peak, for one minute, Escanor becomes the invincible incarnation of power known as The One. Meliodas turns around and sees Escanor standing back up in The One, smirking. He remarks about how Escanor was still hiding something before covering himself in darkness and charges at Escanor.

He uses Kamichigiri, seemingly slicing Escanor all over his body and lands on the other side. Uninjured, Escanor claims that only feels like an itch. Interested, Meliodas charges in again, only for Escanor to use Divine Sword Escanor, slashing Meliodas across the chest. Pushed back, Meliodas curses at Escanor before fainting. Escanor questions to Meliodas how it feels to be looked down upon by a Human.

Q237. Katana-san (From Ibaraki Prefecture): What is Howzer's mother's name?

Nakaba: Edda. Though I get the feeling I haven't had the chance for her to properly make an appearance yet.

Q238. Naa-chan (From Ōita Prefecture): Do any Giants other than Diane and Matrona still exist?

Nakaba: Yes. They're still living in hiding here and there.

Q239. Missa-san (From Yamaguchi Prefecture): Is Cath still snuggled up against Arthur even when he's sleeping?

Q240. Venomous Bug Festival (From Niigata Prefecture): If Ban doesn't cut his hair or beard, would they grow for all eternity?

Q241. Ultra Soul-san (From Miyagi Prefecture): When does Escanor sleep?

Nakaba: You know, during that short time between night time and sunrise.

Q242. KK-san (From Hokkaido): Which is heavier? The War Hammer Gideon or the Divine Axe Rhitta?

Nakaba: The Divine Axe Rhitta is many times heavier than the War Hammer Gideon.

Q243. The Sin of Overeating (From Aomori Prefecture): If you tell a lie in front of Galand, even in April's Fool Day, will you still turn into stone?

Nakaba: I'll try it out next April's Fool Day (lol)... Though seriously, yeah, you'd get turned on stone.

The Last Page of Chapter 232