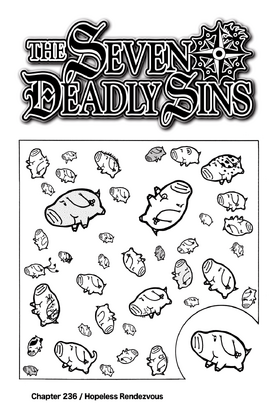 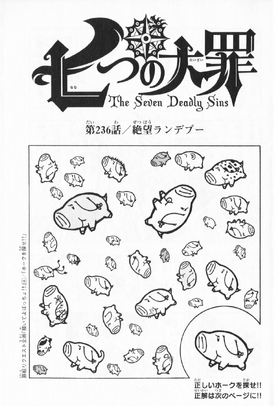 Rendezvous with Despair「絶望ランデブー, Zetsubō Randebū」 is the 236th chapter of the manga, Nanatsu no Taizai.

Chandler repeats Cusack's words about offering their services to the Demon Army before rebuking Cusack, pointing out how he's doing this for his pupil, Zeldris, yet he can do nothing to help Meliodas. When Chandler begins crying, Cusack attempts to cheer him up by saying he knows how he feels but Chandler exclaims he doesn't know how it feels at all, releasing large amounts of acidic spit at the same time. Angered that a droplet got on him, Cusack insists it's unavoidable since Meliodas has been branded a traitor.

However, Chandler insists he didn't betray the Demon Clan but instead, was merely kidnapped by Elizabeth before asserting that Cusack needs to address him as "Meliodas-sama." Zeldris interrupts, informing Chandler that they've been ordered to retrieve Meliodas from the Demon King, causing Chandler to drop his cane in shock. As he picks it up, Cusack questions the Demon King's decision before assuming it's because Meliodas is his son. Zeldris admits he doesn't know just how his father thinks.

As Chandler drools over his dream coming true, Cusack asks where Meliodas is right now. After Zeldris says he's on his way with the Seven Deadly Sins, Cusack decides they can just wait and have some tea in the meanwhile, only for Chandler to take off, shouting Meliodas's name. Cusack sighs about how Chandler is always like this when it comes to Meliodas but Zeldris tells him to leave him be since there's no-one more skilled than Chandler to take the Sins on. After asserting his love for Zeldris is unmatched, Cusack questions why the Demon King ordered for Meliodas's return now of all times.

Even after putting aside his bias, Cusack admits he can only consider Zeldris as the most suited to rule. Zeldris agrees but they're interrupted by a voice questioning what they're planning. Inside a healing shell, Estarossa wonders why Zeldris is leaving his other older brother out of his plans. Zeldris telepathically exclaims that Estarossa is awake and Estarossa reveals he woke up just a few moments ago before expressing his surprise that Meliodas is still alive, calling the Demon King cruel. Zeldris orders Estarossa to continue resting, which Estarossa agrees to do.

Cusack mentally admits he doesn't really like Estarossa. His abilities are equal to Zeldris and you can't tell what he's thinking, like Meliodas. On top of that, he exudes a feeling of unease, something that makes him feel like he doesn't belong. Cusack then declares to Zeldris he will protect him with his life, prompting Zeldris to order him to ease up on his overprotective nature. Elsewhere, on top of the Boar Hat, Diane looks at a talisman that King made for her and asks if it's a bird feather. King reveals he created it by splitting Helbram's broken helmet in two.

He tells her it's fine if she doesn't want it but Helbram's last words to him were to make her happy. Gowther then reveals that King made his heart into a pendant. Diane assumes it reminds Gowther of Nadja but Gowther immediately asks why people do such pointless things, much to Diane's and King's surprise. He then says that looking at the heart won't bring Nadja back but questions why it makes him feel so warm. Suddenly, King questions why it feels like the air is vibrating. Diane then points out to the two other Sins that it's turning night.

As night envelops the area around them, inside the Boar Hat, Merlin realises someone has cast their magic over this entire region and warns everyone to be on guard. Hawk then questions to Merlin when that old man got in, prompting Merlin to turn around and see Chandler standing in front of the Perfect Cube encasing Meliodas and Elizabeth. Crying, Chandler assures an unconscious Meliodas that they'll be going home very soon. Elizabeth asks who he is and Chandler recognises her as the Goddess who took Meliodas and maliciously smiles, declaring he's going to kill her.

Q247. Nade-san (From Miyagi Prefecture): When you were making Gowther into a doll, what part of him did you work on the most?

Nakaba: Making sure he had a Middle-Ages style build.

The Last Page of Chapter 236