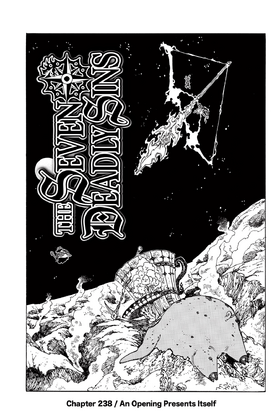 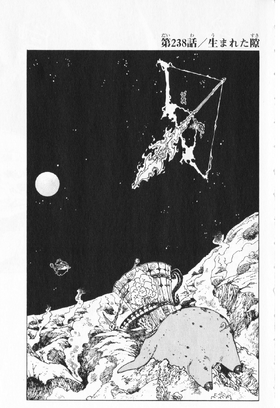 Making an Opening「生まれた隙, Umareta Suki」 is the 238th chapter of the manga, Nanatsu no Taizai.

King and Gowther team up in order to take down Meliodas's master, Chandler.

Looking at Combined Technique: Celestial Arrow, Chandler notes it'd be bad to take that head-on before informing Gowther it won't work on him. It is then Gowther decides to tell King that Chandler can use Full Counter, just like Meliodas, much to the surprise of Diane, who's sitting on King's shoulder. However, Gowther tells King that if he fires when he tells him to, it will surely hit. After a few tense moments, King fires without Gowther's saying. Taken aback at the sudden attack, Chandler uses Full Counter to reflect Chastiefol. But this turns out to be an illusion by Gowther and Chandler realises he hasn't fired yet.

Gowther then tells King to do it and King immediately shoots Chastiefol at Chandler. As Chandler gets flung back, Gowther notes that after using Full Counter in midair, Chandler's stance would be thrown off and it would take a full second for him to use Full Counter again, which is more than enough time. Chandler is then engulfed by a giant explosion. Diane cheers that they did it and both King and Gowther fist-bump to celebrate their supposed victory. Hawk suddenly squeals and points out a horde of Demons emerging from the explosion, guessing that they noticed the attack.

King sighs about how Hawk worries too much and uses Chastiefol's Fifth Form: Increase to deal with them. As the attack is being sent, Gowther scans and can only detect one sign of life coming from that horde before yelling for King to call off his attack. It's too late though as the daggers are reflected by Full Counter back at King, who covers Diane with his hand as his body and armor get shredded. They crash into the ground and as the horde disappears, Chandler notes that a weak attack like that can take down a Fairy, if reflected many times over. Gowther brings up the fact that the Celestial Arrow definitely hit Chandler head-on yet he's not all that hurt.

Chandler says the attack was certainly strong, noting how it completely destroyed the magical barrier he had set around himself. Wiping the blood from his chin and using it to draw a mark on his palm, Chandler says that Gowther is in need of a punishment. Gowther raises his hands to do something, only for Chandler to reveal the mark on his hand and cast Absolute Order. With this, Gowther is forced to obey the commands of him, one of the highest-ranked Demons. He orders Gowther to stay out of his way before dropping to the ground to confront Elizabeth, who's holding an unconscious Meliodas.

Chandler declares that the time has come for Elizabeth to die and goes over various methods he can use to kill her before deciding to use Dragon Fang, creating a large claw of a dragon from his staff to impale Elizabeth. However, the claw is stopped by Diane, who used Heavy Metal to turn her body into metal to take the attack for Elizabeth. Seeing this, Elizabeth asserts that Diane can't fight in that miniature form of hers but Diane pledges to protect her and the Captain. Chandler remarks on how the Giant Clan's ability to turn into metal reminds him of the old days and proclaims that this is the way he used to deal with them. He raises his hand and summons Crimson Requiem, a very hot flame, and promises to melt Diane into goop. King then appears and grabs Diane to shield her from the fire.

The ground in front of Chandler is then immediately melted but Chandler notices that the three got away and goes over how a Fairy and Giant were in his way before questioning who's in his way now. Holding all four of them in his arms, Ban plainly states that it's a Human. Raising his staff, Chandler recounts how the four clans have always been the Demon Clan's greatest enemies and insists that he cannot allow Meliodas to continue to be around them. However, Chandler then feels woozy and wonders if he used up too much magic before realising that the Celestial Arrow from earlier also damaged his spirit as well as his body. After knocking Chandler back with Second Form: Guardian, King declares it doesn't matter what Chandler thinks of them as the Sins and Meliodas were destined to meet, as comrades of fate.

Q249. Raphael-san (From Aichi Prefecture): Does Gloxinia have a sister complex?

Nakaba: It's not a sister complex, he just cares about his little sister!!

The Last Page of Chapter 238