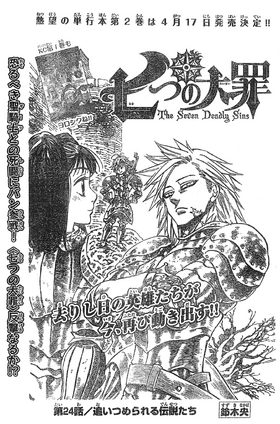 Capital of the Dead Arc

The Pursued Legends「追いつめられる伝説たち Oitsumerareru Densetsu-tachi」 is the 24th chapter of the manga, Nanatsu no Taizai.

The battle continues with Ban stopping Guila's movements by using his ability snatch and grabbing hold of her rapier. To counter it, Guila attacks Ban with her Drift Bomb technique. Meliodas immediately continues fighting and all three of them struggle to successfully defeat her. At the same time, King exclaims how he could not understand why Elaine helped Ban. She then reveals herself before him, requesting him to helped fight against Guila and that Ban is not the person he thinks he is.

Hawk and Elizabeth arrives nearby King, and introduces themselves and the situation to him. When King questions whether they were seeking for his help, Elizabeth tells him to runaway instead and attempts to borrow King's spear to fight. Returning back to the fight, the three Sins continue their attempt to take down Guila. When Ban's arm is abruptly slashed off, he is suddenly pierced by King from the back who also manages to damage Guila simultaneously.

Retrieved from "https://nanatsu-no-taizai.fandom.com/wiki/Chapter_24?oldid=122334"
Community content is available under CC-BY-SA unless otherwise noted.