The Foundation for the Future 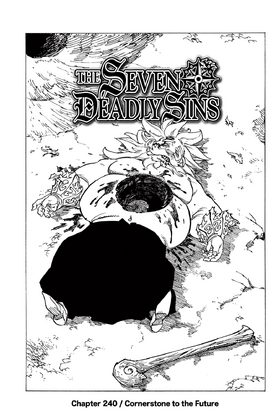 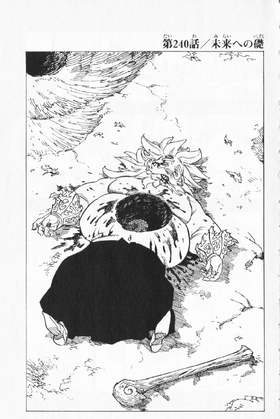 Foundation for the Future「未来への礎, Mirai e no Ishizue」 is the 240th chapter of the manga, Nanatsu no Taizai.

Chandler gets back up in his terrifying, true form and just when things seem to be hopeless for the Sins, Drole and Gloxinia appear to save them.

After receiving King's attack, Chandler lays on the ground with a big hole in his torso, seemingly defeated. King then begins to remember the first time of he met Meliodas, right after he had killed Helbram. Meliodas asked why he did not just tell everyone that Helbram had been the one killing Humans, noting that he will be tried instead. King says that he wouldn't understand and recounts how he abandoned his sister and the Fairy King's Forest for 500 years and broke his promise to the one girl he loved, concluding that he's a terrible king. Meliodas realises that King is the Fairy King and reveals he thought kings were all just a bunch of scum that just do whatever they want and kill anyone they don't like, and that it's reassuring that a king like King exists: a king that would weep over his own people, calling him a splendid king.

King admits that Meliodas's words back then had saved him and it's what made him like Meliodas before wondering if he's still a splendid king. Ban pats King on the back and tells him that it is all thanks to him that they are alive, and Diane agrees, jumping onto King's shoulder. Having a nosebleed, King asks her to put some clothes on and she asks him to make some. King then says it's weird she's still tiny, even though Chandler has been beaten, and that it's weird it's still night. A cracking sound is heard, and they all turn to see that Gowther's limbs are breaking of their own accord. Gowther apologizes, saying that this is as far as he will be going as his neck breaks and falls down. Hawk panics as he exclaims that he thought he licked the mark away. Elizabeth tries to heal him in vain, while Ban angrily asks how this could have possibly happened. Hawk then looks at Chandler's hand and realises that the mark wasn't removed, meaning Gowther willingly defied Absolute Order.

Meanwhile, at Camelot, Cusack remarks on how the Seven Deadly Sins have beaten Chandler, saying that they are quite strong, but even when Chandler's strength was depleted, he proved to be fatal. He then says that the Sins should've let Meliodas go and let themselves be killed. Cusack then gives Zeldris a cup of tea, who after taking a sip, says 'terrible'. Cusack then asks if he meant the advice or the tea, and Zeldris says that he meant that both. He then says that Chandler was only playing the part of a good-natured old man for his beloved pupil, yet if he realized that he couldn't take Meliodas back then his 'true nature' would be revealed, and no one could be capable of even touching him. Chandler stands up and begins to transform. His hair turns darker, his eyes' sclera turns black with white irises, his body increases its size, getting more muscular, closing his wound as well, and draconic-looking wings comes out of his back.

King then grimaces, saying that it is now hopeless, as Chandler is on a completely different level now. Chandler tells all of them to rejoice, as they have now acquired certain death. Hawk starts freaking out, putting Gowther on his back, yelling for everyone to run. Chandler picks up his cane, revealing that is actually a sword cane and takes out a extremely long blade. King then uses Bumblebee, attempting to buy some time. Ban yells at him, saying that he will never be able to do it alone. King yells back, saying that Ban will only slow him down, and tosses Diane to Elizabeth. Diane then screams that she will fight with him, to which King replies that he is a failure as a king because he couldn't protect Helbram, the Forest, or his brethren.

But he will protect them at the very least, wanting to spend his final moments 'dying a king's death', much to Diane's despair. King screams at them to go before Chandler delivers a devastating blow, breaking Chastiefol and seemingly killing King. When the dust dissipates, a huge scar is left in the ground, but suddenly everyone is safe on Hawk Mama, who appears floating above on top of a one giant flower created by Gloxinia, who came to aid the Sins along with Drole. Gloxinia says to King that he is burdening himself with far too much and that even a king can ask for help from time-to-time while Drole says that they will leave the future of Britannia in their hands, and asks them to somehow protect their old friends, Elizabeth and Meliodas. Drole states that they, as the old kings, shall gladly become the foundation for the future.

Q251. Ramuda-san (From Nagasaki Prefecture): Does the Goddesses' wings get in the way in their everyday life?

Nakaba: Their living place is made so as the wings not disturb them.

The Last Page of Chapter 240