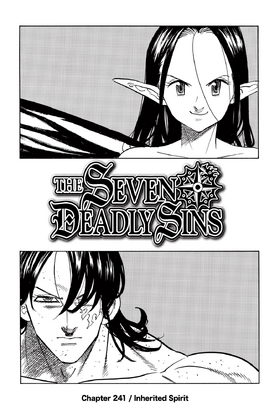 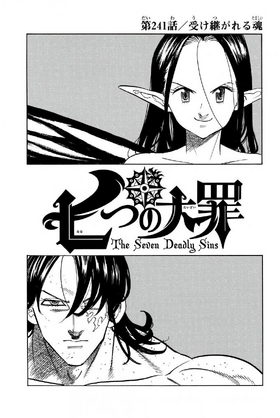 Inheritable Soul「受け継がれる魂, Uketsugareru Tamashii」 is the 241st chapter of the manga, Nanatsu no Taizai.

Drole and Gloxinia sacrifice their lives against Chandler in order for the Seven Deadly Sins to get away.

Chandler questions why Drole and Gloxinia, despite being part of the Ten Commandments are protecting the Seven Deadly Sins. Gloxinia says they don't have to answer though Drole notes they picked a fight with a very fearsome opponent. The two then trap Chandler within Combined Technique: Ko-ju Orudora. As Chandler bashes against the trap from within, the kings assure the Sins they'll take care of Chandler and instructs them to leave. King opts to stay behind, pointing out that Chandler is a monster. Diane opts to stay behind with King, regardless of what he wants. King then asks Ban to protect the others for him. Elizabeth calls out to the two kings but Gloxinia tells her she doesn't need to say anything and Drole insists that this is to make up for their betrayal.

He notes that when they saw her at the Fighting Festival, they didn't pay much attention to the striking resemblance and wrote it off but Gloxinia notes that the nostalgic magic he's feeling means she really is the Goddess Elizabeth. He asks her to take care of Meliodas for them before sending them off. When the Ko-ju Orudora begins reaching its limit, Gloxinia uses Basquias' Tenth Form: Emerald Octo and wraps it around King and Diane, saying they need to go before Chandler breaks out. King insists that they can still fight but Gloxinia points out they're so burned out of magic that they can't even get free from the tentacles. Gloxinia then admits he still holds King in a high regard since he's able to command his Spirit Spear to the same degree as Gloxinia, despite the fact that he's only just sprouted his wings.

Gloxinia guesses that when King's wings are fully grown, he will become the greatest Fairy King of all time. Drole tells Diane that she has to lead the Giant Clan in his stead, which is why he cannot let her die. Diane insists she can't but Drole says that the Giants are proud warriors but in a way, they're also cowards because they don't know how to run away from a fight. He blames himself as being a failure of a king for not leading them correctly and cites it is because of that, that the Giants' numbers have dwindled significantly. That is why they need someone like Diane to lead them and that is why Drole is willing to put his life on the line for the future Giant Queen. Calling that enough talk, Gloxinia snaps his fingers and sends both King and Diane back to the Boar Hat.

The kings sigh about how that's finally a load off their back before Chandler breaks out. Addressing them as the Fairy King and Giant King, Chandler calls this a betrayal of the highest order. Gloxinia and Drole say they are no longer kings nor are they a part of the Ten Commandments: they are simply a Fairy and Giant. The two then begin fighting Chandler. While fighting, Gloxinia notes that ever since they were sealed away, for the past 3,000 years, Meliodas has been carrying out his will. Although it was all for the love of one girl, it is something no-one can hope to match. The two then sincerely hope that Meliodas will, one day, be rewarded for the amount of suffering he's gone through. In the aftermath of the battle, Chandler walks away from the corpses of Gloxinia and Drole, having only sustained minor wounds in his fight against the two.

Q252. Hachishimoda-san (From Tochigi Prefecture): Is there a character you end up adding too much emotions drawing them?

Nakaba: I add emotions to any character when I draw them.

The Last Page of Chapter 241