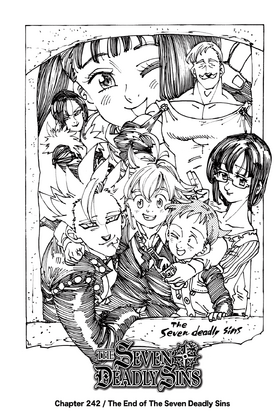 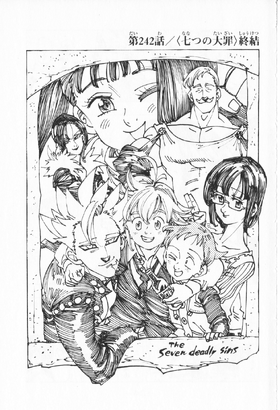 Inside the Boar Hat, Merlin is softly woken up by Elizabeth, much to Escanor's relief. Merlin recalls looking for an Absolute Cancel spell bead when the bar was suddenly rocked and she hit her head against the wall. She then asks where Chandler is and both King and Diane look down, solemnly. Elizabeth then inwardly promises to the late Gloxinia and Drole that neither she nor Meliodas will forget them. After being informed, Merlin calls Chandler more monstrous than she thought. Hawk then reveals that Gowther went against an Absolute Order and a shocked Merlin says that any ordinary Human would've died on the spot.

Hawk then notes that Diane got put through the wringer now that she's tiny and Diane points out that she could say the same for Merlin, remarking how she never thought her true form was that of a little girl. Shaking her head, Merlin calls it embarrassing and decides to prioritize unsealing her magic to return to her adult self, much to Escanor's disappointment. Suddenly, Escanor comes down with a coughing fit and Elizabeth casts Invigorate to alleviate the pain. Both King and Diane also feel that the air is stuffy and Merlin says the source is obvious: the negative miasma emanating from Meliodas, which is growing stronger by the second. After exclaiming it isn't his fault, Elizabeth picks up the unconscious Meliodas and informs the Sins that they'll be outside. After they walk out, Escanor admits he's worried about them.

Merlin asks about his condition and trying to act tough, Escanor claims he is still in fighting shape, though night is approaching, so he won't be at his best. Merlin then asks where Ban is and King only looks down. In Elaine's room, Ban asks if she was bothered by the rocking earlier. Elaine says she's fine and is just glad nobody got hurt. Ban points out that there were some casualties but Elaine assures him she could hear the voices of both Gloxinia and Drole, telling Ban not to worry. After promising not to complain, Ban takes Elaine's hand and vows to do everything he can for her. Outside, on top of Hawk Mama, with Meliodas's head laying on her lap, Elizabeth promises to stay by Meliodas's side.

After a few moments, inside the Boar Hat, Merlin is returned to her adult self while also dispelling the magic on Diane, turning her Human-sized. Merlin sighs about how it took long to find the spell bead because of the mess and Escanor offers to clean up, using Chastiefol as a washcloth, much to King's annoyance. Diane sits next to an unconscious Gowther and hopes he gets better soon. King then decides it's best they come up with a plan and considers hiding Elizabeth and the Captain somewhere, since it'll be a while until Chandler catches up with them. In the distance, Chandler sniffs around before flying through the air. Back at the Boar Hat, the group all feel his presence and the area around the Boar Hat becomes night, which turns Escanor to his original self.

Realising Elizabeth and Meliodas are outside, the Sins all rush out to protect them but as soon as they open the door, they are greeted by the sight of an awake Meliodas, holding Elizabeth close to his side while Chandler is bowing in front of him, sobbing with joy. Merlin exclaims this is the worst time for him to awaken and Hawk points out how his form is like when he was the Ten Commandments' leader. Ban yells at Meliodas to remember he's the Dragon Sin of Wrath, only for Meliodas to claim he does remember everything, saying the Sins were his precious comrades. Meliodas then orders Chandler to take him to Zeldris and disregards Chandler's objections about taking Elizabeth with him. Merlin asks what he plans to do with Elizabeth and Meliodas insists that Elizabeth's out of time but with this method, he can save her. Diane proposes they work together if it's to save Elizabeth but Meliodas coldly states he'd rather not kill them all. He then declares that the Seven Deadly Sins are disbanded.

Q253. Mayacchi-san (From Hyōgo Prefecture): Does Merlin ever have failed experiments?

Nakaba: “Failure is the mother of success” ...All the time.

The Last Page of Chapter 242