And Thus He Embarks on His Journey 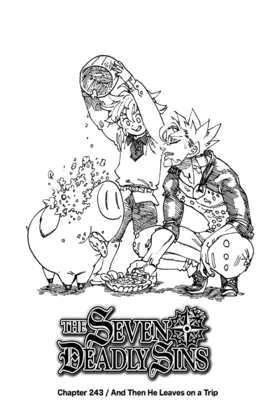 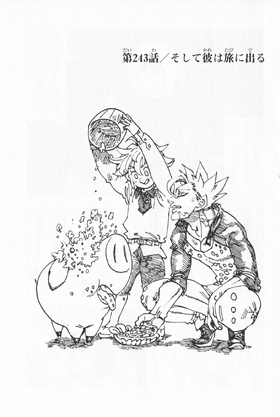 And Thus He Embarks on His Journey「そして彼は旅に出る, Soshite Kare wa Tabi ni Deru」 is the 243rd chapter of the manga, Nanatsu no Taizai.

Meliodas declares his plan to become the Demon King to the Seven Deadly Sins, in order to break the curse on Elizabeth before leaving for Camelot with Chandler. Meanwhile, in order to restore Meliodas's emotions, Ban willingly makes the decision to travel to Purgatory and get his emotions back from the Demon King himself...

Diane repeats Meliodas's declaration that the Seven Deadly Sins have been disbanded and questions if he's serious about this. Merlin then asks what his method to save Elizabeth even is and Meliodas announces that he will become the Demon King. Angered by his words, Hawk eats a pill and transforms into his Tyrant Dragon form to fly up to Meliodas and yell at him, asserting that Meliodas is the Captain of the Seven Deadly Sins and owner of the Boar Hat, the bar that serves the worst food. Meliodas questions if "he" didn't know and grabs Hawk's snout. Looking directly into Hawk's eyes, Meliodas notes that the Demon King must've enjoyed watching their suffering, much to Hawk's confusion. Meliodas then throws Hawk back down and after Ban catches him, Meliodas tells them to tell Gowther that the days he spent with them all weren't half-bad.

Elizabeth tells Meliodas not to make such a stupid decision for her sake but he ignores her and tells Chandler to come along. Reverted from his true form to his old man form, Chandler happily agrees and the two fly off as Meliodas holds onto Elizabeth by his side. Later on, as the Sins clean up the inside of the Boar Hat, King punches a tabletop and questions what Meliodas is thinking by doing this. Merlin says it isn't his fault and that this is merely the aftermath of having his emotions stolen by the Demon King. Diane then asks what they should do, as they can't just leave Meliodas and Elizabeth alone. Hawk brings up the fact that Meliodas called him "Demon King" and assumes he meant his power is Demon King-level. Merlin then asks Hawk to come over and Hawk trots to her, asking her what she wants. Merlin recalls hearing a voice during Meliodas's and Escanor's fight while looking at Hawk's eyes. It is then Merlin realises that Hawk is connected to Purgatory, or rather, is a gateway between this world and Purgatory.

She theorises that the Demon King has been looking through Hawk's eyes to keep an eye on Meliodas for a long time. Diane then gets an idea and points out that they can go through Hawk to get to Purgatory and get back Meliodas's emotions. King praises her for the idea but Merlin immediately shuts it down. She recalls knowing only one person, besides Meliodas, who has ever gone to Purgatory and come back. She reveals that her father, the Chief of Belialuin, once created a gateway to Purgatory and stepped through for just a minute. When he came back, he was reduced to being an invalid. She recounts how all he talked about before his death was Purgatory: "There, in Purgatory, the air is a mix of burning hot and freezing cold while the earth is highly poisonous. Together, they destroy the flesh of any living being. Time is so distorted, a minute lasts for a year. It eats away at the souls of mortals. You lose your senses and can only rely on your sixth sense. In this land of chaos, you are hunted down by the dead and the monstrous with broken souls."

She questions how they're supposed to find the Captain's emotions in a place like that before reminding the Sins that the one who holds the Captain's emotions is the Demon King himself, telling them to give up on trying to fight something so evil. The Sins then question what they're supposed to do, only for Ban to volunteer to go, pointing out how he's immortal. Merlin then points out that, though he may be immortal, his soul is the same as any Human's and even if he went, there's no guarantee he can find the Captain's emotions, get them back or even find an exit. Ban admits that may be true and King tries dissuading him too, asking what will happen to Elaine if he goes. Ban insists on going, wanting to do something to help his best friend before asking King to take care of Elaine for him. Sighing, Merlin decides to go through with it, noting that Elizabeth doesn't have much time. She begins chanting and smoke spreads around Ban and Hawk. Hawk asks Ban to come back since he won't get any yummy leftovers if he doesn't. Ban promises to before being sucked into Hawk's eye. Ban then feels himself floating before realising he's falling and turns to see Purgatory underneath him, telling the Captain to wait for him.

Q254. Akira-san (From Tochigi Prefecture): Captain, what should I do to protect the person I love?

Hawk: Before someone can take her away, just gobble her all up by yourself, little Ms. Scraps, that is. By captain of the Scrap Disposal Knights.

The Last Page of Chapter 243