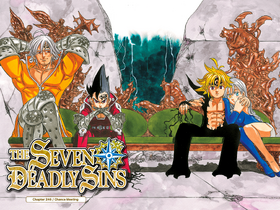 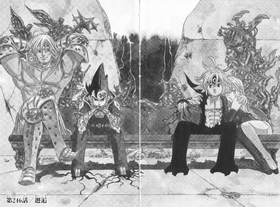 A Chance Meeting「邂逅, Kaikō」 is the 246th chapter of the manga, Nanatsu no Taizai.

Meliodas has a talk with Zeldris and Estarossa about wanting to become the Demon King.

As they fly towards Camelot, Elizabeth tries persuading Meliodas to stop while he still can. While Chandler thinks about when to get rid of Elizabeth at an appropriate time, Meliodas swears to Elizabeth that he'll do anything to break her curse. At Camelot, Estarossa has a dream of Elizabeth asking him if he got into another fight with his older brother. Estarossa is then jolted awake and stands up, wondering what that dream was about. Peronia then realises Estarossa's finally awake and informs him he's been asleep for a couple of days.

Estarossa then senses a familiar magic and Peronia comments on how massive it is. In the sky, Meliodas instructs Elizabeth to stay by his side, no matter what. Elizabeth agrees to, while Chandler mentally tells Elizabeth this is her last chance to keep close to Meliodas. All three land and enter the throne room where Zeldris and Cusack await. Zeldris comments on how the greatest traitor has just come leisurely into the enemy base while Cusack insults Chandler for allowing Meliodas to bring Elizabeth with him.

Chandler asserts he tried to kill Elizabeth but Meliodas orders him to be quiet before declaring that he's come to be Demon King. Zeldris insists he will become Demon King, only for Estarossa to stroll in with Peronia, questioning why he's being left out of this claim to the throne. After Meliodas comments on how he's still alive, Elizabeth recognises Estarossa as the one who killed Meliodas but then questions why she feels like she knows him before that.

Estarossa sarcastically thanks Meliodas for his experience with Escanor before asking for Elizabeth's name. Elizabeth asks how he knows her but Estarossa admits he doesn't really know before revealing he'll be dropping out of the race for the Demon King's throne: in exchange, he wants Meliodas to hand over Elizabeth to him. Meliodas then asserts that he will be the one who'll become Demon King and that no-one is getting Elizabeth.

This prompts Estarossa to attack from above with Rebellion while Zeldris attacks below with his sword. Estarossa insists that cowards like Meliodas don't get to covet while Zeldris asserts he won't allow Meliodas to get in the way of his ambitions. Meliodas then uses his darkness to guard Elizabeth before pinning both Zeldris and Estarossa to the ground, also with darkness. Angered at his student being hit, Cusack charges at Meliodas, despite Zeldris's warning.

Meliodas then stabs Cusack through with his darkness, instructing him to stay out of this talk between brothers. As Peronia shakes with fear, Chandler claps, saying that this is indeed the true might of a king. Zeldris realises he can't move his body at all, even with God. Attempting to get up, Estarossa notes that Meliodas is almost like a different person compared to when they last fought. Meliodas pushes Estarossa down with more force before standing over the two, saying that if they're gonna talk, they each need to know where they stand.

The Last Page of Chapter 246