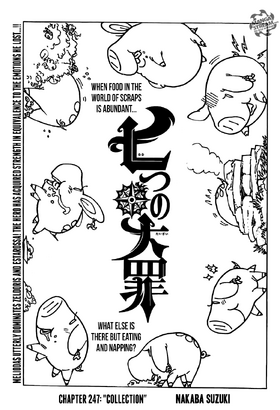 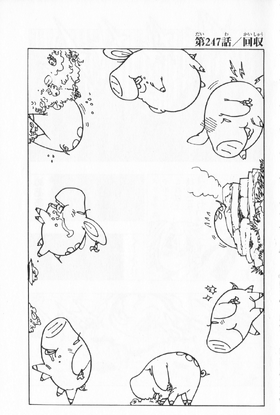 Collection「回収 Kaishū」 is the 247th chapter of the manga, Nanatsu no Taizai.

Q257. Raphael-san (From Aichi Prefecture): Are there any hierarchies among the Four Archangels?

Nakaba: They are fundamentally equal in rank. Ludociel just acts hight and mighty. (It's his personality in the end.)

Q259. Tambourine-san: When did Slader get the scar on his forehead?

Nakaba: It's a scar form when he protected the king from an assassin.

Nakaba: In the end Druids are still humans, so they don't live particularly longer than any other human.

Q261. Fufu-san (Germany): How did Fraudrin get freed from the goddess' seal?

Nakaba: Before that, he was sealed by a different goddess, but 16 years ago the seal was broken by the human people of Danafor.

Q262. Nekotomo-san (From Kagawa Prefecture): Once someone becomes one of the Ten Commandments, can they quit?

Nakaba: If you read this week's chapter, you'll find out!!

Q263. Yuukou-san (From Nagasaki Prefecture): Did you intentionally draw the changes in Elizabeth's reaction to her sexual harassment over time?

Nakaba: Not at all, it was just the natural flow of things.

Q264. Tanin no Sorani-san (From Hyougo Prefecture): Have any of the past Elizabeths ever died to anything other than reclaiming their memories?

Nakaba: She have died to old age before, too.

Q265. Furui-san (From Saitama Prefecture): Who's the master who taught magic to Merlin?

Nakaba: Her father as well as the magician Gowther.

Q266. Cezze-san (From Tokyo): Is the test tube that Merlin put Melascula in also a magic item?

Nakaba: You could say that.

Q267. GamigamiR-san (From Kagoshima Prefecture): When you're in good shape, how many pages can you draw a day?

Retrieved from "https://nanatsu-no-taizai.fandom.com/wiki/Chapter_247?oldid=122453"
Community content is available under CC-BY-SA unless otherwise noted.