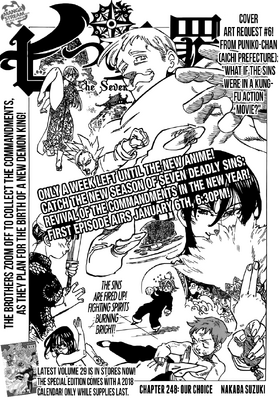 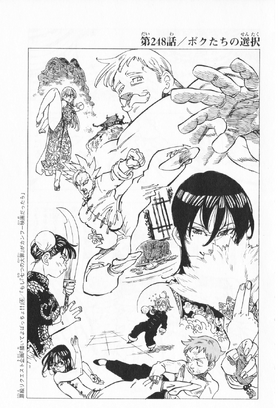 Our Choices「ボクたちの選択, Boku-tachi no Sentaku」 is the 248th chapter of the manga, Nanatsu no Taizai.

Meliodas and Elizabeth have a talk about his plans to become Demon King. Meanwhile, Zeldris confronts the Seven Deadly Sins, where he reveals Merlin's shocking secret...

At Camelot, Cusack laments over being unable to properly protect Zeldris and calls himself a failure as his master. Chugging some ale, Chandler points out all he should do is take care of the place while he's gone. Cusack says it's all Meliodas's fault before wondering what Meliodas said to Zeldris to make him cooperate. Peronia then appears, wanting to talk to Cusack. He tells her to make it quick and she whispers something in his ear. Cusack suddenly tells Chandler he'll be heading out and flies away. Chandler notes that Meliodas really is the only one suitable to become the Demon King before crushing the ale bottle in his hand as he angrily thinks about how the only thing in the way is Elizabeth. In a room in the castle, Elizabeth tries dissuading Meliodas from becoming Demon King but he doesn't relent, pointing out how their promise was to break the curse, no matter what. Elizabeth admits she's afraid of dying and forgetting her memories but she's more afraid that she may never see him again.

She then says that Meliodas should know what will happen if he becomes Demon King and Meliodas admits that, since the Demon King's power is great, he may not be able to stay in this world anymore. Elizabeth then questions what's the point in breaking the curse if they can't be together and expresses her wish to not want to live in a world without him. Meliodas then callously states that, every time Elizabeth is reborn through her curse, her love for him is imprinted onto her: thus, after he breaks her curse, those feelings of love should disappear as well. Elizabeth asks if he really thinks her love is manufactured by someone else and Meliodas says it wouldn't make sense otherwise, for her to love him, and only him, every time she's reborn. Crying, Elizabeth then asks why Meliodas never ignored their promise since she would've forgotten everything and points out how he had other options in life.

As the mark on his forehead and coat disappear, Meliodas admits he can't help it. Elizabeth then looks in shock to see Meliodas seemingly return to normal, as he says that it doesn't matter whether she was a Goddess or a Princess of Liones: he loves her all the same. Hugging Meliodas, Elizabeth tells him that all 106 Elizabeths and her, as the Princess of Liones, loved Meliodas by their own will before suggesting to go back to the Sins and figure something out. Hugging her back, Meliodas recalls how his hearts would beat like crazy just from touching her before his mark and coat reappear as Meliodas coldly states he can't feel anything now. After Elizabeth backs away, Meliodas says the only thing he has left is the promise they made, and that's it. Elizabeth then resolves to work with the Sins and stop Meliodas from becoming Demon King. Meliodas tells her to stop this nonsense and grabs her arm.

To retaliate, Elizabeth slaps him and Meliodas tells her to hit him all she wants if it helps to make her feel better. Calling him an idiot, Elizabeth summons a giant Ark in her hand before slapping Meliodas with it, sending him flying across the room and on the floor. Running away, Elizabeth says she wants to save Meliodas too and inwardly tells him to wait for her. At the Boar Hat, King senses an enormous magic headed their way. Diane points out that their magic is still drained from the last battle and Hawk repeatedly yells for Escanor to transform but he can't, since it's night. Merlin teleports to the door and tells the Sins to calm down as she'll go bargain with whoever is here, holding onto the test tube Melascula is in. After walking outside, Merlin spots Zeldris is in the air and says things will go much more smoothly if it's him. Zeldris asks who Merlin is, not recognising her at all. Merlin then transforms into her true self and asks if he recognises her now. Zeldris suddenly exclaims her true name, and to the Sins' shock, reveals that she's the girl who was blessed by the Demon King and the Supreme Deity.

Q268. Naachan-san (From Ōita Prefecture): Does the Goddess Elizabeth have a best friend?

Nakaba: She did, but when she fell in love with the Demon Clan's Meliodas, distance was put between them.

The Last Page of Chapter 248