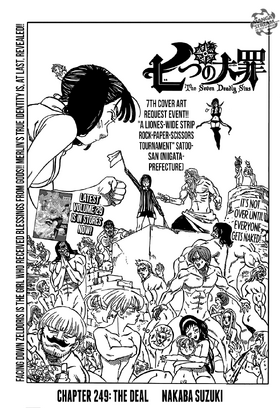 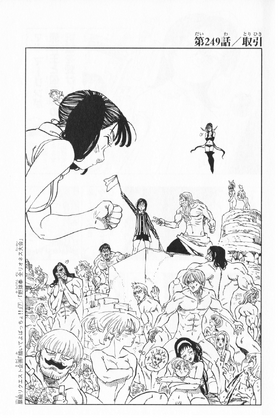 The Deal「取引, Torihiki」 is the 249th chapter of the manga, Nanatsu no Taizai.

Merlin tries to strike a deal with Zeldris over Melascula's Commandment.

The Sins exclaim in shock at Merlin having the blessings of the Demon King and the Supreme Deity as Escanor notes that that's the complete opposite of Meliodas and Elizabeth. King then tells everyone to focus as one of the Ten Commandments is here and they all move to fight while Escanor gets in front of Merlin. Zeldris greets the Seven Deadly Sins and notes that this is the first time he's met them all in person. Diane recalls how Zeldris is the Demon King's representative and King declares that they'll fight with all they got, only for Merlin to float up, complaining about how noisy it is. She suggests they move elsewhere and Zeldris agrees. Merlin then plucks a strand of her hair out and it lands on Hawk's nose, transforming into a grotesque flower that acts as a speaker. As they fly up through the clouds, Zeldris reveals he was just following the faint traces of Melascula's magic and never expected to run into someone as infamous as Merlin, adding that Grayroad would've stood no chance.

He recounts how the capital of wizards, Belialuin, was unaffiliated with either the Demon Clan and the Goddess Clan, opting to remain neutral. At that place, a child was born with the magic of Infinity and rumours of her spread throughout the Demon Realm and the Celestial Realm. Both Gods wanted her on their side but the wizards vehemently denied them, arguing that the child was belonged to them. However, despite her people's wishes, the girl chose to deliberate with the two Gods on her own and offered to join whichever side gives her the better gift. The Demon King granted her all knowledge of the Demon Realm's arts and protection against the Goddesses' brainwashing. The Supreme Deity granted her resistance against dark curses, including Commandments, and a strengthening of her soul. However, the girl not only accepted both gifts, but refused to join either side.

Angered about being tricked, the Demon King and the Supreme Deity let loose curses and mists of death, unleashing downpours of fire and lightning across Belialuin for over 1,000 days, demolishing the capital to nothing. However, having been granted gifts by the two Gods, the girl escaped unharmed. Zeldris and Merlin then reach above the clouds where Zeldris asks what she's planning this time. Merlin says that isn't necessary for him to know and points out how what he wants is Melascula's Commandment of Faith. Merlin then says she doesn't really understand Zeldris as he's supposed to harbour a grudge against Meliodas yet now, he's helping him gather the Commandments. Merlin reveals she knows Meliodas wants to gather all ten Commandments so he can become Demon King before asking what Zeldris gets out of it.

As the Sins react with shock, able to hear the conversation from the flower, Zeldris states she doesn't need to know before also saying he'd rather not have a fight break out and promises to leave the Sins alone if she gives him Melascula. Sighing about how she has no choice, Merlin throws the tube at him. Before Zeldris can grasp it, however, Merlin casts a Perfect Cube around it. She says her giving Melascula and him leaving the Sins alone isn't a fair deal and asks for something in return. Zeldris asks what she wants and Merlin asks for Zeldris to return Elizabeth as she has a little over two days left until her curse goes into effect and would rather not have her stay in a Demon den. Zeldris refuses since Meliodas wouldn't give her up before assuring Merlin that Meliodas will keep her safe. After she points out he has nothing to offer then, Zeldris tells Merlin to think of something else. Merlin asks Zeldris to deliver to her the King of Camelot, much to Escanor's jealousy.

Zeldris, again, refuses because he doesn't know what Arthur looks like and can't assure her of his safety as he may have been sacrificed to loosen the seal, causing Merlin to clench her fist. However, when Zeldris says an unknown intruder has been culling Demons recently so he has no time to make sure one human is safe, Merlin relaxes and instead, asks Zeldris to release the citizens and knights of both Camelot and Liones from his Commandment of Piety. Zeldris agrees to and promptly does so. He then asks Merlin to release her spell, now that he has held up his end of the bargain. Merlin, however, says she'll do it soon and stretches because she feels stiff. The Sins express their worry, wondering why Merlin is taunting Zeldris. Angered, Zeldris grips the hilt of his sword and warns Merlin every fiber of his being is focused on her tiniest movement and if she tries anything, he'll cut her down. Merlin then says she won't do anything and Zeldris suddenly feels a chill down his spine. He turns around, only to be hit by a large blast of light. From miles away, on a Sky Palace, holding up his rapier, Ludociel hopes Zeldris will accept his "greeting."

Q269. March Hare-san (From Hyōgo Prefecture): What does Merlin think of the princess Elizabeth?

Nakaba: She thinks of her as her Sis-sis's present form.

The Last Page of Chapter 249