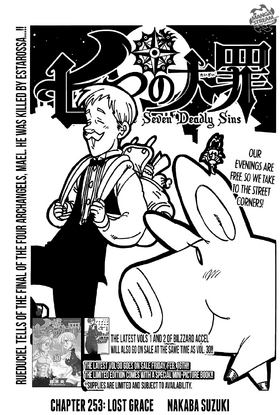 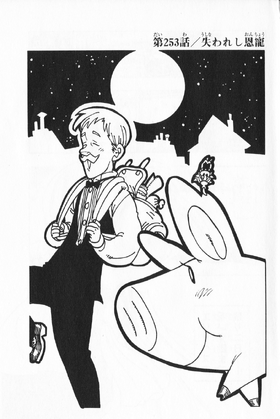 Ludociel confronts Escanor and reveals to him the true nature of his power.

Two days before Elizabeth's curse goes into effect. Elizabeth looks out a window and tells Meliodas to wait for her. At the Boar Hat, King watches over a sleeping Elaine, who mutters Ban's name. At his side, is a sleeping Diane, who mutters Elizabeth's name. Holding Diane close to him, King tells Ban and Meliodas to come back to them soon. In her hut, Merlin works on repairing Gowther. She admits his creator was a genius and says she can't even find anything to improve about him. Gowther reveals he has one request and Merlin hopes it isn't to improve him, because it can't be done. Gowther mentions how his creator used to say this about Merlin: "I'm amazed at how quick a learner that little squirt is...There's no telling what she'll be capable of when she's older." Swayed, Merlin asks what he wants. Gowther divulges his request and a shocked Merlin asks if that's what he really wants, asking if it's related to what he said about the Demon Gowther ending the Holy War 3,000 years ago.

Walking down a street, Hawk questions if they're really going to take on Meliodas and Escanor, in his day form, says they have no choice and that they'll have to respond in kind if he attacks. Hawk then contemplates if there's no way of talking things out since this means Elizabeth and Meliodas will be fighting against each other. Escanor admits he's jealous and asks Hawk what he thinks Merlin thinks of him. Hawk responds: "Ripped during the day, skin and bones at night with a joke of a moustache." Escanor exclaims he may be right and pridefully declares that his looks would charm any number of women but if they can't charm the one woman he wants, then what's the point. Hawk questions why he doesn't ask Merlin directly but Escanor insists he can't before "permitting" Hawk to ask her in his place, prompting Hawk to remark on how prideful he is.

Hearing some shouting from the castle, Escanor complains it's too early in the morning for all this noise. At the castle, the drunken soldiers all rejoice that the Goddess Clan is helping. Sitting at a table, a drunken Ludociel comments on how Humans always take the chance to consume this poison and cause a ruckus. Tarmiel drunkily states that they can't brew poison as good as this but a drunken Sariel tells them to stop calling it poison when it's alcohol. After Tarmiel and Sariel faint, Ludociel calls them pathetic before casting Invigorate on himself to sober up. He then feels a strange presence. Back on a street, Hawk decides to head to Merlin's to drop off the stuff she needs to repair Gowther with and promises to go with Escanor to confess. However, Ludociel appears in the sky and asks who Escanor is. He lands, hovering so he looks down on Escanor.

Escanor recognises him as the Goddess who's possessing Margaret's body and notes they met last night. Ludociel is confused, only for Escanor to suddenly jump over Ludociel and land on a roof, saying he hates it when people smaller than him look down on him. Ludociel then recognises Escanor from last night and questions how he's been concealing his magic. Escanor says he wasn't hiding it and explains it merely doesn't manifest when the sun is down. Ludociel then accurately guesses that when the sun rises, so does Escanor's power, and it reaches its peak at noon. Escanor is surprised his curse is so famous, even the Goddess Clan know it. Gripping his rapier's hilt, Ludociel rebukes him for calling it a curse before charging and questioning who he stole that power from. He unleashes a barrage of slashes, that Escanor parries with his hands.

Moving back and landing on another roof, Escanor asks why he's attacking when they're on the same side. Ludociel tells him to answer his question and Escanor says he doesn't understand the question. When Ludociel attacks again, Escanor blocks before moving around Ludociel to grab him from behind, only for Ludociel to suddenly appear behind him. After Escanor notes his speed, Ludociel laughs and questions if Escanor really thought he could keep up with his movements. Escanor's shirt is suddenly ripped to shreds without Escanor even seeing Ludociel move. Ludociel reveals that this is the power of a Grace: it is a power bestowed to the Four Archangels by the Supreme Deity and compares them to Commandments. His Grace is called Flash, Sariel's Tornado, Tarmiel's Ocean, and the last is Sun, the Grace that belonged to his little brother, Mael.

As the sun rose, Mael's power increased in proportion and when he neared noon, he boasted a power even Ludociel couldn't keep up with. But Mael was killed by Estarossa and his Grace was lost. Escanor then asks if Ludociel thinks that Grace is his magic. Ludociel calls Grace the power of God, and that if any Human got a hold of it, it would lead their body to ruination, something Escanor should understand well. He orders Escanor to give the Grace back if he doesn't want to die but Escanor declares he doesn't care and points at Ludociel's rapier. As his finger radiates heat, Escanor asserts that Sunshine is the power he was born with and if it really is a Grace, then it simply means the Grace chose him, meaning he truly is the greatest being. As Ludociel's rapier melts, Escanor tells him to be grateful, for as long as he is on their side, victory is assured. As Hawk notes his pride, Ludociel laughs, telling Escanor to do his best to not be a hindrance. Escanor laughs along, saying the same to Ludociel.

Q273. Buta no Bōshi-san (From Kagawa Prefecture): Do you have any plans to write the story of Merlin and the goddess Elizabeth's past?

The Last Page of Chapter 253