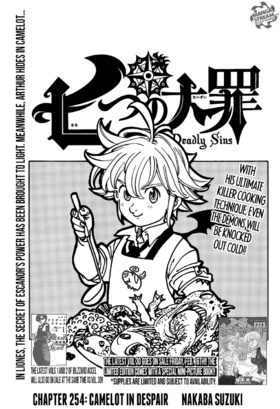 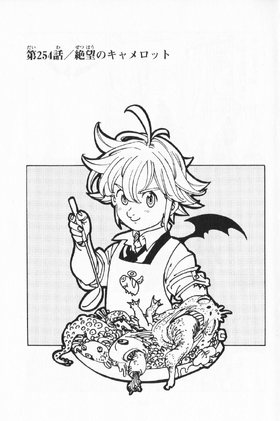 Camelot in Despair「絶望のキャメロット, Zetsubō no Kyamerotto」 is the 254th chapter of the manga, Nanatsu no Taizai.

Arthur sneaks into the castle of Camelot and successfully retrieves Excalibur, preparing to slay the four highest-ranked Demons residing in the castle: Meliodas, Zeldris, Chandler and Cusack.

Zeldris arrives back at Camelot and enters the throne room, where Meliodas, Chandler and Cusack are waiting. After Cusack welcomes him back, Zeldris informs Meliodas he's come back empty-handed and was duped by Merlin into thinking he'd get the Commandment of Faith. He then reveals they have a more pressing matter: the Four Archangels have been revived, identifying the magic that hit him belonging to Ludociel. Meliodas also adds that he saw the Light of Pact coming from the direction of Liones and guesses that the Seven Deadly Sins and Elizabeth have joined forces with the Archangels. Zeldris takes the chance to mock Meliodas, remarking about how his woman ran away. Unfazed, Meliodas says it doesn't matter what they plan since it'll all be over if he can gather the Commandments and become Demon King.

Elsewhere, at a mountain, a petrified Galand yells at a bird to stop taking a crap on his head. Estarossa appears and comments on how unsightly this is. Galand asks Estarossa to get Zeldris to free him from his petrification but Estarossa calls that too much work and destroys the petrified Galand before retrieving his Commandment of Truth. Back at Camelot, Arthur wanders the streets. He questions what's happening as he's been making his way to the castle for a while yet he hasn't gotten any closer and wonders if he's trapped in an illusion. A Gray Demon appears from behind a corner and fires a beam from his mouth. Dodging and moving past the Demon, Arthur realises he won't get anywhere like this before noticing Cath isn't by his side. He then grits his teeth, exclaiming that he could free the kingdom from the Demons if he just had Excalibur.

Watching Arthur through a crystal ball, Peronia recalls Zeldris's orders about not letting anyone near the castle and declares that as long as she has a hold of Arthur's presence, he will never escape her Märchen Maze. She then complains about being hungry and from behind her, Cath agrees, licking his lips. Arthur suddenly finds himself close to the castle and celebrates escaping the illusion. Cath then jumps down onto his head and Arthur asks where he's been. Cath casually states he had breakfast as the body parts of Peronia lay splattered on a roof. Arthur then sneaks into the castle and asks everyone to wait for him. However, Zeldris confronts him in a hallway, asking who he is. As Arthur freezes from fear, Zeldris questions who he is, adding that his Commandment didn't react to him at all before asking if he's a bandit who's come for the castle's treasure.

Realising he must be the Ten Commandments' executioner, Arthur decides to get the Sacred Sword as soon as possible and steps back, only to knock into Cusack, who tells him to answer Zeldris. Shocked at how there's another Demon on par with Zeldris, Arthur reveals he's the King of Camelot. Zeldris realises he's the one Merlin was so worried for before questioning why he would risk his life coming here. He then asks if he came for the sword, only for Cath to suddenly jump up and yell at Arthur to go. After letting out a yell, Cath uses telekinesis to manipulate the armor in the hallway to attack Zeldris and Cusack while flinging Arthur towards Excalibur's location. As Arthur runs away, he swears to come back for Cath. He then almost runs into Chandler, who questions what the ruckus is about.

Reaching the door to Excalibur's room, Arthur opens it to see Excalibur intact, only for an explosion to occur behind Arthur, knocking him further into the room and next to Excalibur. When Zeldris and Cusack walk in, Arthur attempts to reach for the sword, only to then notice a bloodied Cath in Cusack's hand. A voice tells the two to leave Arthur alone as he knows him. Emerging from the smoke, Meliodas tells Arthur this isn't a place where Humans belong and harshly tells him to get lost. Arthur questions why Meliodas is with the Demons and his dark magic. Meliodas then reveals to him that he's left the Seven Deadly Sins and is no longer the man he knew. Punching the ground, Arthur questions why, exclaiming that he looked up to Meliodas. Recounting how Meliodas has betrayed his trusted comrades, the Sins, and his beloved Elizabeth, Arthur grabs Excalibur's hilt. As Cath weakly tells him to take it, Arthur pulls the sword out and declares he will never forgive him.

Q274. Yue-san (From Ishikawa Prefecture): How did the captain get interested in cooking?

Meliodas: "Who knew? I guess I'm pretty good at this, too!", and the rest is history.

The Last Page of Chapter 254