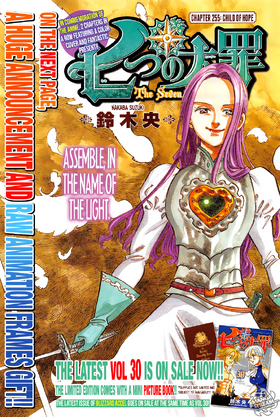 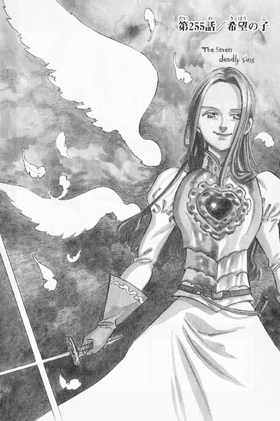 Child of Hope「希望の子, Kibō no Ko」 is the 255th chapter of the manga, Nanatsu no Taizai.

Arthur reveals Excalibur's hidden power and uses it to overwhelm the four Demons.

At Liones, Diane exclaims in shock about Merlin's want to sneak into Camelot and find Arthur. King asks why when they're going to march to Camelot with Stigma later but Merlin asserts that security will be tightened once they see the army coming and thus, this is the only time she can search for him. Escanor disagrees and mocks Arthur as a kid who can't wipe his own bottom, asserting he isn't worth her putting her life at risk. This causes Merlin to angrily glare at him. Hawk asks why Merlin is so willing to stick her neck out for Arthur when he hasn't even awakened his magic. Merlin says that Arthur was chosen by the Holy Sword to one day lead Britannia and calls him the child of hope.

At Camelot, Arthur confidently stares down Meliodas. Chandler enters the room and asks about the strange aura he feels. While Cusack tells him it's an intruder, Meliodas compliments the look in Arthur's eyes, calling him different from when he cried about not being able to protect Merlin. Arthur says the same, insisting that Meliodas is no longer the man he admired. Meliodas questions if he really thinks he can take all of them down and Arthur only smirks. Zeldris asks what Meliodas makes of the strange aura Excalibur is giving off and Meliodas admits he doesn't know, simply saying it is no relic of the Demon Clan nor the Goddess Clan. Arthur then declares he will slay Meliodas and those who follow him to take back the kingdom.

Irritated by his words, Chandler teleports above Arthur and calls him a cheeky Human before firing Exterminate Ray point-blank. Suddenly, Chandler ends up decapitated and Arthur emerges from the smoke unharmed, telling them not to underestimate Humans. Cusack questions how he remained unharmed while Zeldris tries to recall where he's seen that move before. Looking at Cath in Cusack's grasp, Arthur quickly appears behind Cusack, having lobbed off his left arm holding Cath. Arthur catches Cath and apologises for letting him get hurt. Cusack wonders how he can be so good with a sword before getting sliced in two diagonally. Arthur then attacks both Meliodas and Zeldris with a flurry of slashes, knocking them out of the room to outside.

Arthur sets down Cath and when Cath asks for food, Arthur assures him they'll get something to eat after this. He then blocks an attack from Zeldris without looking. He continues to block every single one of Zeldris's sword slashes without having to look back. Zeldris identifies the move as Mumyo no Mai and recounts how it belonged to a blind Human swordsman who could block and parry every single sneak attack aimed at him. When Zeldris questions why he knows it, Arthur simply tells him to not underestimate Humans. Arthur then uses Deathpecker, performing a series of sword lunges that pushes Zeldris back. Flying in the air, Zeldris recalls how that move belonged to the War King, Tartenos and Meliodas identifies his earlier moves against Chandler and Cusack belonging to the master Human swordsman, Carfen.

Arthur recalls how Merlin told him how Excalibur was extremely powerful and not to be wielded until the time where an unprecedented threat appears. Arthur calls it ironic, never having once thought that threat would've been Meliodas. Back at Liones, Diane asks why the Holy Sword choosing Arthur makes him king anyways. Merlin reveals the Holy Sword was given to a human soldier by the princess of a certain lake. That human soldier was Carfen and he was celebrated as a great human swordsman. He was a brave man who fought the Demons yet even the bravest must meet their end. On his deathbed, Carfen impaled himself with the sword and used his blood and soul to purify it for his successor.

Instead of rusting, Excalibur somehow became more sharper and thus, it was inherited. The one who inherited Excalibur was feared by the Demon Clan as a War King and when he was bedridden from sickness, he did the same thing as Carfen. That process repeated for thousands of years and thus, the sword contains the souls of countless heroes. Somewhere along the way, the sword began choosing who its master would be and it determines whether or not a person is fit to lead. Back at Camelot, Arthur dodges attacks from both Meliodas and Zeldris before slicing Zeldris across the back and flinging him back. After Arthur cuts Meliodas down too, Merlin declares Arthur has been chosen by the heroes of Britannia as a king among kings.

Q275. Shee-san (From Chiba Prefecture): What does Arthur think of Merlin's clothes?

The Last Page of Chapter 255