Farewell to the Deceased 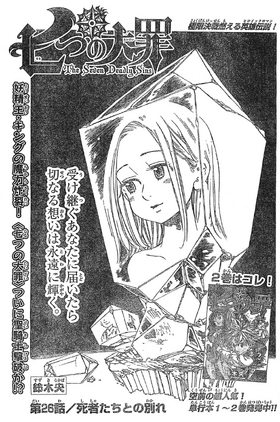 Farewell to the Deceased「死者たちとの別れ Shisha-tachi to no Wakare」 is the 26th chapter of the manga, Nanatsu no Taizai.

Guila is finally defeated and the group begin returning back to the real world from the Capital of the Dead, with Ban and Elaine bidding their farewells. Upon their arrival back at the village, they still a motionless Guila, whom Meliodas decides to punish. The group begins their journey away from the village, and King soon discovers that the other three Deadly Sins had lost their sacred treasures.

The battle against Guila finally ends with her buried under the rubble. When the characters relaxes and begins to reunite, Guila suddenly recovers herself, and attempts to strike King. Luckily, Meliodas quickly dashes in and uses Full Contact to send Guila back to the real world. Afterwards, the characters begins disappear and leave the Capital of the Dead due to being living creatures. And so, they bid farewell to Elaine and return to the real world.

Back at the town, the characters discover Guila standing still and half alive. To deal with her, Meliodas decides to tie her to a tree with a rope and draw on her face. When the characters search for Ellen and her Brother, they suddenly discover them disappearing, realizing that they were deceased and existed in the real world to guide people into the Capital of the Dead. After thanking the siblings, the characters begin to leave town and soon camps on the road. Meliodas formally introduces Elizabeth to King, who quickly transforms himself into his old appearance. Discovering that Elizabeth was slightly uncomfortable with his appearance, he quickly changes back.

Meanwhile, the Holy Knight and master of Guila, Helbram, appears before her and wakes her up. He immediately discovers the humiliating drawings on her face, leading Guila to rub it off. Back at the camp, King wonders why their strength has decreased significantly, and finally asks about their sacred treasure. Astonishingly, all three of the Sins reply that they've all no longer have them.

Retrieved from "https://nanatsu-no-taizai.fandom.com/wiki/Chapter_26?oldid=122504"
Community content is available under CC-BY-SA unless otherwise noted.