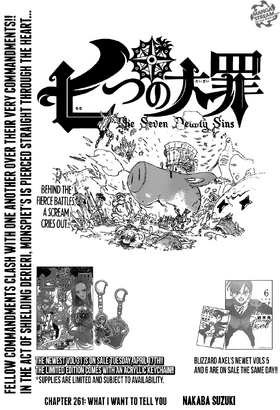 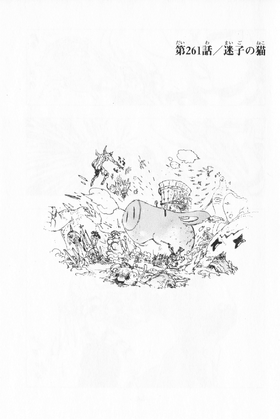 A Lost Cat「迷子の猫 Maigo no Neko」 is the 261st chapter of the manga, Nanatsu no Taizai.

Estarossa takes Monspeet's last heart and crushes it. Monspeet gives his farewell to Derieri and throws her far away. She says she has not heard him say what he had in his heart. Monspeet responds that as he can no longer protect her or be by her side, he will not say it. Monspeet then uses his hell flames producing a big explosion, engulfing both him and Estarossa.

Meanwhile in the battlefield, the fight comes to an end with the Demons fleeing in direction to the capital. Howzer tells his men to leave it to the "Defense Force", as their task is keep going forward to Camelot, rescuing the people in their way to keep the casualties at minimum. As Howzer orders that the wounded must be treated, Deathpierce joins, saying that that is not necessary. Though he was supposed to be seriously wounded, he says that thanks to Ludociel's power, he is not.

Then Elizabeth takes a step forward and says that temporary power must not be trust. She explains that Breath of Bless, also called Cheat Hope, draw out the power of the target to its limits and eliminates any sense of pain and fear in them. Deathpierce think it is silly to say that. Then Sariel that they do not understand anything, revealing that Elizabeth spent the whole battle speaking to the souls of demons in an effort to make them flee or surrender, and even when most would not defy the orders of high level demons as Chandler and Cusack, still dozens lost their will to fight. Tarmiel adds that Breath of Bless definetely does not cure the wounds of people. Then, Howzer and Guila point out that their wounds have healed as well, but rather than the Breath of Bless' doing, it was Elizabeth's work; if it were not for her, half of the people would have already died.

Gowther comments about Elizabeth's prowess, that even Mael, the strongest Archangel, praised. Then he notices that something is coming, immediately confirmed to be a Commandment. The Commandment lands in the middle of the battlefield, making a curtain of dust. Howzer reassure his people and order to surround the target with the "Red Rose Formation".

Q281. Miffy-san (From Tottori Prefecture): Does Estarossa have any habits when he's drunk?

Nakaba: He gets really hyped up.

The Last Page of Chapter 261

Retrieved from "https://nanatsu-no-taizai.fandom.com/wiki/Chapter_261?oldid=149786"
Community content is available under CC-BY-SA unless otherwise noted.