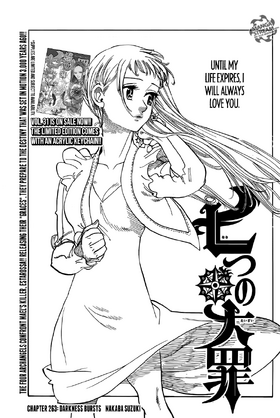 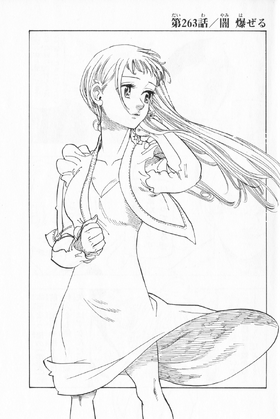 Darkness Bursts「闇爆ぜる, Yami Hazeru」 is the 263rd chapter of the manga, Nanatsu no Taizai.

As Sariel and Tarmiel are ready to fight Estarossa, he notes that his Commandment of Love will not leave them powerless as they are immune to its power thanks to Supreme Deity's Graces. Tarmiel says that is why he can not quite understand how he was able to defeat Mael. Suddenly, Estarossa stab him with his bare hand, replying that that was because he was stronger.

Meanwhile, in the other battlefield, Elizabeth and Derieri are still surrounded by Estarossa's Hellblaze spell. Elizabeth uses an Ark technique to counter it, erasing the black flames, making Derieri sure that she is with the original Elizabeth from 3,000 years ago. Elizabeth calls out for any survivor, until Diane reveals she protected everyone with her earth magic.

Back to the other battle, Tarmiel escapes from Estarossa. The Commandment of Love tries to hit Sariel, but he stop him by using his Grace, Tornado. Estarossa is blown away by a powerful twister and falls into a massive ocean created by Tarmiel's Grace, Ocean. Both archangels reveal he is in a different dimension created out of their Graces where he will be tear off to pieces as part of their revenge. Then Estarossa is attacked by the combined power of the Tornado and Ocean Graces, seemingly defeating him.

Q283. Nekotomo-san (From Kagawa Prefecture): Is there any possibility of any races other than the main five appearing in the future?

Nakaba: Apart from the main five, there are also monsters. All born from the mother of chaos.

The Last Page of Chapter 263