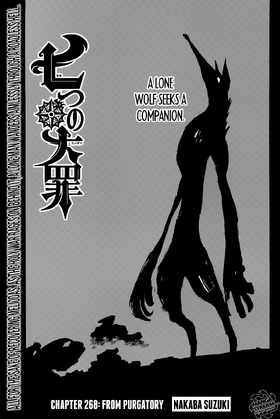 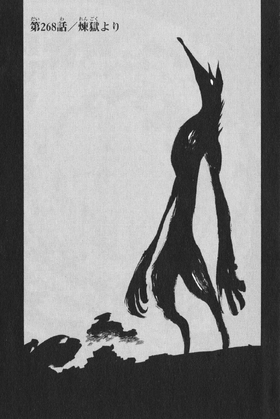 From Purgatory「煉獄より Rengoku yori」 is the 268th chapter of the manga, Nanatsu no Taizai.

Q287. Otokootoko-san (From Niigata Prefecture): Are a certain number of Fairies able to read the minds of others?

Nakaba: Between many and a few, I'd say the latter.

Nakaba: Nope. His eyesight is fine, unlike Gowther.

Q289. Mayacchi-san (From Hyōgo Prefecture): What cup size is Nerobasta?

Q290. Nade-san (From Miyagi Prefecture): Do you draw the manga in the morning or at night?

Nakaba: I draw it in the morning AND at night.

Q291. Yue-san (From Ishikawa Prefecture): What Drole thinks of Gloxinia?

Q292. Yobo-san: Is the Fountain of Youth still under the protection of Ban even now?

Nakaba: At this point in time, it would be no exaggeration to say that Ban himself IS the Fountain of Youth.

Q293. Boar's Hat-san (From Kagawa Prefecture): Are there any other clans than the fairies who has no concept of underwear?

Nakaba: The Giants mostly don't either. Page 124 of Volume 19 has Matrona goin' commando.

Q294. Anime Oujou-sama-san: What was Meliodas' Commandment from 3,000 years ago?

Nakaba: "Love". In order to ally with the Goddess Clan, when he left the Demon Underworld, he abandoned his Commandment. After that, the Demon King bestowed "Love" to Estarossa.

Q295. Melscanor-san (From Serbia): What are the differences between Purgatory and the Capital of the Dead?

Nakaba: If the Capital of the Dead is a land where souls can rest in peace, then Purgatory is a prison for souls.

Q297. Imiko-san (From Mie Prefecture): What are your special skills, Baccho-sensei?

The Last Page of Chapter 268

Retrieved from "https://nanatsu-no-taizai.fandom.com/wiki/Chapter_268?oldid=149793"
Community content is available under CC-BY-SA unless otherwise noted.