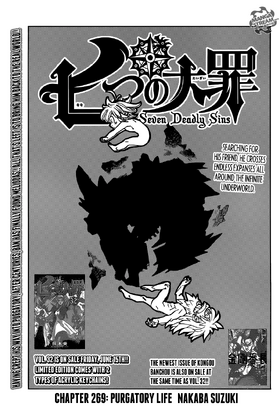 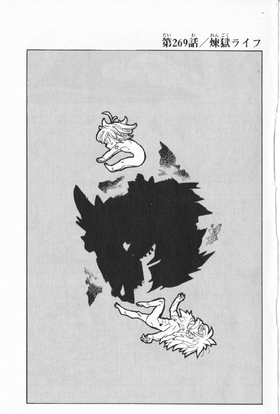 Purgatory Life「煉獄ライフ, Rengoku Raifu」 is the 269th chapter of the manga, Nanatsu no Taizai.

Meliodas' emotions and Ban reunite in Purgatory, as they both plan their escape. Both suspects the exit might be guarded by the Demon King himself so they try to track him in order to escape.

Meliodas "emotions" awakens next to Ban, initially he refuses to believe his best friend really there as it would be impossible. Ban tells him he is the real thing and is hugged by an emotional Meliodas who cries over his friend shoulder. Once he calm down, Meliodas explains that he gave up long time ago because he was sure he would not find a way out. Ban complains he shoud have entrusted his comrades, but Meliodas asks him if he ever has a plan of escaping or knows the exit from Purgatory, Ban replies he did not think about and Meliodas annoyed says he knew it.

Nonetheless, Meliodas is happy to be with Ban and says they have plenty of time to think about a plan. He tells his friend as respetable adult they can not be naked around each other and Ban giggles about his previous staments. Meliodas explain Purgatory is infested by two types of creatures: souls that fell there and turn savages to each others as it happened with both of them and the "native", creatures born there that are adapted to the extreme conditions of the dimension.

They try to catch one of the creature but is too fast for them even for Ban's Snatch, Meliodas defends again it however his Full Counter is pointless as it has no effect leaving him with not enough magic power. He explains he is like Meliodas' soul so he can not quite use the same original power, he seems to be interested in how Ban tolerates Purgatory conditions and he tells him in the first century he got used to coming back to life after burning to ashes, frozen to the bones and rotten away by toxic vapors. The creature wanders around Ban curious Ban takes adavanteges to move faster than it and defeat it with a fatal blow.

As they use the creature meat and skin to create their clothes, Meliodas say to Ban he is grateful for him for coming to Purgatory for him. Ban asks him why the Demon King left him wander in Purgatory freely without finding the exit. Meliodas agrees is suspicious and then they both conclude Purgatory's exits must be protected by Demon King. With their new gear ready, they prepare to find the Demon King to escape once for all.

Q298. Miffy-san (From Tottori Prefecture): Did Ban ever used to break out of Baste Dungeon to give blood to the Fairy King's Forest?

Nakaba: He would, but as expected, he'd be too sloppy and careless and wind up getting caught.

The Last Page of Chapter 269