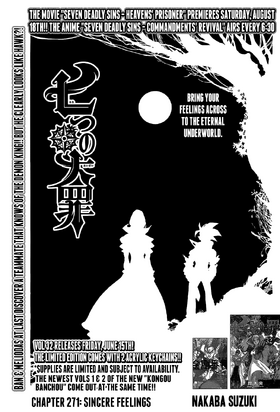 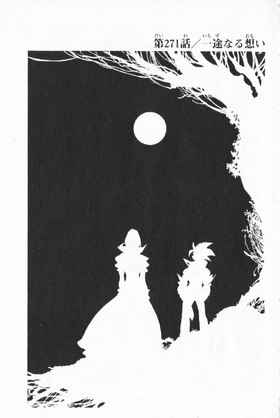 Sincere Feelings「一途なる想い Ichizu naru Omoi」 is the 271st chapter of the manga, Nanatsu no Taizai.

Meliodas and Ban find out that Hawk born in Purgatory more than 8 million years ago and that his real name is Mild. Wild learns more about Hawk and soon the trio make their way to the Demon King and learn about the relationship between Meliodas and his younger brother Zeldris and Estarossa. Meliodas reveals that Zeldris was forced to kill his beloved and how he feels like a failure as a brother for not being there to comfort him. When discussing Estarossa, Meliodas suddenly realizes that for some odd reason, he has no memories of his younger brother, only to have the Demon King reveal himself and reveal he has no memory of his second son either.

Wild leads Meliodas and Ban to his house as a hot sandstorm rolls in, and they find out that Hawk, then named Mild, was originally born in Purgatory, and the Demon King sent him to the outside world 8 million years ago. Meliodas surmises that a minute in the outside world is equivalent to a year in Purgatory, making Hawk's appearance in Britannia 16 years ago plausible. The reason as to why Hawk was sent was to make sure that a sturdy creature was able to watch Meliodas' actions in the outside world for the Demon King, as opposed to the animals of the real world that the Demon King originally used, who ended up dying quickly. Meliodas and Ban share stories about Hawk with Wild, and Wild accepts his brother despite how different Wild expected him to be.

The trio resume their search for the Demon King once the storm blows over, and Meliodas tells Ban and Wild about Zeldris. When Meliodas was still the leader of the Ten Commandments, his younger brother idolized him and worked extremely hard for the Demon Clan, fighting as the cruel, coldhearted executioner in order to protect his beloved. However, when Meliodas betrayed the Demon Clan and caused the Holy War, the Vampire Clan (originally vessals to the Demon Clan) rebelled, and Zeldris was ordered to execute them, including the vampire he loved. Meliodas regrets not being able to be at his younger brother's side when Zeldris was suffering.

When prompted to talk about his other brother, Meliodas realizes that he cannot remember anything about Estarossa. The Demon King arrives, saying that Meliodas, just like him, is unable to remember anything on his second son. Disgusted by the effeminate nature of Meliodas' emotions, the Demon King looms threateningly over the trio.

Nakaba: Same as Meliodas', it's green.

Retrieved from "https://nanatsu-no-taizai.fandom.com/wiki/Chapter_271?oldid=118835"
Community content is available under CC-BY-SA unless otherwise noted.