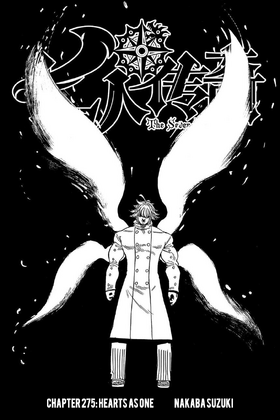 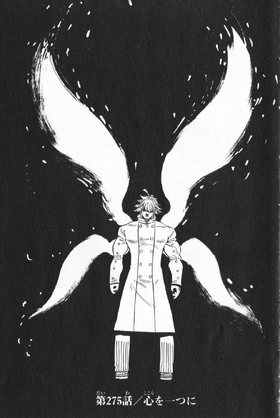 Hearts As One「心を一つに, Kokoro wo Hitotsu ni」 is the 275th chapter of the manga, Nanatsu no Taizai.

Gowther admits his responsibility for everything that happened to Mael, telling him the reasoning behind it. An enraged Mael brutally attacks Gowther. When Mael tries to kill Gowther after knowing that he is just a doll, King intervenes. King attacks him several times with his Sacred Treasure, but Mael comes out unscathed. Sariel convinces Tarmiel that they need to fight against Mael.

Nakaba: Ten Commandments Gowther could use various kind of magics, including Invasion, but Doll Gowther can only use Invasion. So to make up, he's been moving semi-permanently unless there's something happening to him.

The Last Page of Chapter 275