There is No Way to Free Oneself from Love 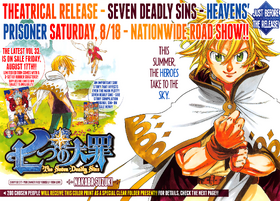 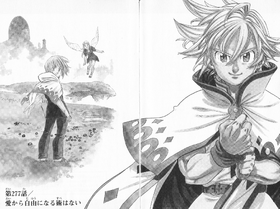 There is No Way to Free Oneself from Love「愛から自由になる術はない, Ai kara Jiyū ni naru Sube wa nai」 is the 277th chapter of the manga, Nanatsu no Taizai.

While Derieri falls to the ground, Mael begins to extract her Commandment, while King comments on the fact that Mael cannot take anymore Commandments, he also falls to the ground to his injury.Mael enters in a cocoon of light, due to him trying to fuse his Commandments.As Sariel starts to lose his physical body,Tarmiel begs Mael to remember who he was, but they're struck by beams of darkness.Gowther then decides that he will fight Mael, as he doesn't want to lose friends anymore.

The Last Page of Chapter 277