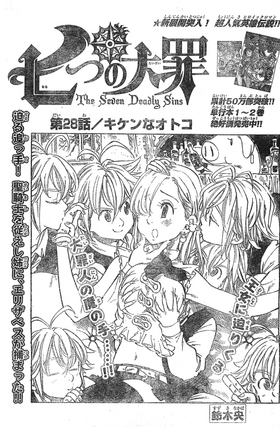 A Dangerous Man「キケンなオトコ Kiken na Otoko」 is the 28th chapter of the manga, Nanatsu no Taizai.

Elizabeth is taken to the Ceramic Tear Inn by Veronica and Griamore, where the two sisters argue about their allegiances to the Seven Deadly Sins and Holy Knights, with Veronica asking Elizabeth to cut her ties with the legendary group of knights believing them to be just using her, and Elizabeth opposing the Holy Knights' enslaving of the citizens. Leaving Griamore on guard, Veronica leaves the room; Meliodas, with help from King, ambushes and quickly defeats Griamore, and escapes with Elizabeth.

Some time after the events of the previous chapter, in the evening, as it rains, Hawk tearfully apologizes to Meliodas and King for letting Elizabeth be captured. The talking pig also informs King that she was taken to an inn called the "Ceramic Tear". King suggests to return to the bar and formulate a plan; Meliodas, however, greatly enraged, states that they are going right then.

Meanwhile, inside her room in the Ceramic Tear Inn, Veronica scolds Elizabeth for sneaking out of the castle, and orders Griamore, who is staying guard outside, to stand down when he is alarmed by her raising her voice. Elizabeth questions her sister whether she was captured under the orders of the kingdom, and Veronica accepts so, stating that if Elizabeth was captured by her, she could even become the future queen. Quickly adding that she was only joking, Veronica tries to persuade her sister to return to the castle, since as a princess and Holy Knight, Veronica had enough influence to override Elizabeth's labeling as a fugitive. Elizabeth, however, refuses to do so and then also expresses her opposition to the Holy Knights' enslavement of the citizens. Veronica, commenting on Elizabeth's naivety, justifies this with the fact that the citizens' forced involvement in military activities was for their own protection in the upcoming war.

Veronica also informs Elizabeth that rumors state that she has been hunting the Holy Knights with the Deadly Sins. She tries to persuade Elizabeth, again, to cut all ties with the legendary group, explaining to her that they are all "despicable and evil". Their captain, Meliodas, she continues, is not a half-hearted criminal who can be reformed, but a "raging monster who leaves a path of destruction wherever he goes", and that his child-like appearance is, but a mask. When her sister opposes the statement, Veronica argues that Meliodas is simply deceiving her to use her later, and when Elizabeth refuses to disclose the Deadly Sins' location, refuses to let her out of the room. Before leaving, however, Veronica does give her sister a pendant of their father's, which he says will protect them from evil. She then orders Griamore to guard her.

Just as the second princess leaves, Meliodas and King arrive at the inn. Despite King's doubts and opposition, Meliodas assures him of the attack, and instructs him to act by the plan. From outside the room, King uses his telekinetic abilities to have a cup on the table fall, which leads Griamore to notice the object and reach out for it to prevent it from breaking, creating a distraction as he does so, and letting Meliodas enter the room without his attention. Stopping Griamore from unsheathing his sword with one hand, Meliodas swiftly jumps up and lands a knife hand strike on his neck. Struggling to gain the upper hand, Griamore releases a series of random punches in an attempt to strike back. However, Meliodas easily dodges all of them and finally lands a fist on his chest, knocking the man out. The battle ends so briefly and quickly, that as Meliodas defeats Griamore, he also catches the cup that was falling down.

Later, Veronica returns to the room and finds an unconscious Griamore, scolding him for letting Elizabeth be taken back. He offers to chase them, but she refuses, and cryptically replies they have already made their move. Later, when Elizabeth thanks Meliodas for saving her and apologizes for not remain hidden, Meliodas only states that he shouldn't have left her there by herself, and also informs her that their next destination has been decided. Abruptly, fireworks burst above the town they are next headed to, as Elizabeth states that though she said that her time with her sisters was very enjoyable the previous day, she is very happy when she is traveling with the Deadly Sins, though frightening events often occur. As Meliodas and Elizabeth way, the former' shadow is seen to be silhouette of a giant monster, implying, likely figuratively, that he is not even human.

Retrieved from "https://nanatsu-no-taizai.fandom.com/wiki/Chapter_28?oldid=122555"
Community content is available under CC-BY-SA unless otherwise noted.