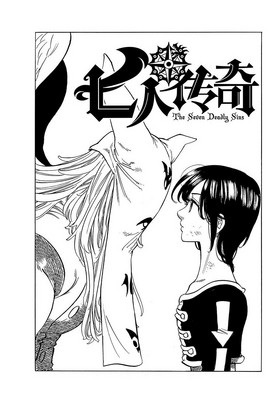 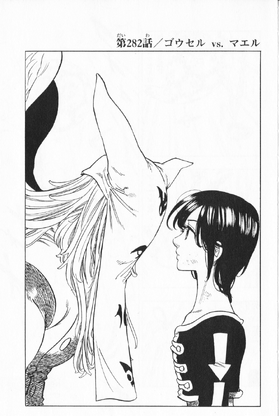 As Mael falls along with Gowther, the doll manages to enter in Mael's mind, in which he can be seen standing down in an open field. While Gowther and Mael talk, the Commandments begin to materialize and threaten Gowther with death. Mael wants to know why he was chosen, as the demon Gowther could choose others as capable as him, like Elizabeth or Ludociel. Gowther explains that Mael was chosen because of the fact that he was the one who killed Glariza, the loved one of the original Gowther. The doll then reaches his limit, and the Commandments begin to take over Mael. In the last moment, Mael releases his Commandments and returns to his original form, thus saving Gowther from falling.

Q309. Yashida Yuusuke-san (From Tochigi Prefecture): Who's the most handsome character among all the ones you've drawn up till now?

The Last Page of Chapter 282