The Desire to Survive 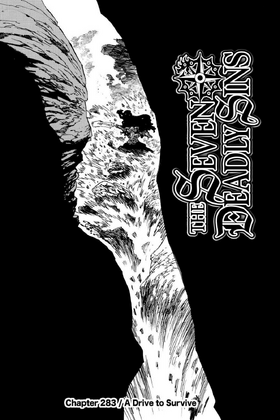 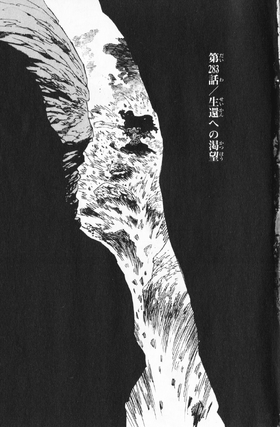 The Desire to Survive「生還への渇望, Seikan e no Katsubō」 is the 283rd chapter of the manga, Nanatsu no Taizai.

Meliodas' emotions, along with Ban and Wild have fought the Demon King for sixty years in Purgatory and have lost thousand of times. Meliodas thinks he should remain in Purgatory, thinking that if he is not there to see Elizabeth die, then the curse will not kill her.

Ban encourages him by stating that it does not matter as the curse is already active and if he gives in so easily, then they have already lost and decides to come up with a new strategy.

After learning how to get around the Demon King's magic ability, The Ruler, they state that the real fight begins now.

Meliodas, Ban, and Wild are blown away fighting the Demon King into a mountain of debris as the king looks on unperturbed. Ban asks how many defeats that is been, Meliodas says he is so angry that he has not kept count, but Wild has and says they have lost all 6,093 of their fights as they sit by a campfire to eat some grilled meat.

Meliodas comments that they have been fighting the Demon King for sixty years without any progress but Ban reassures him, since that is only a single hour in the real world. With a serious expression Meliodas comes out with what he has been thinking: that he maybe should not leave Purgatory. Wild is shocked after hearing that and claims how he has no intention on giving up on meeting little brother again, but Meliodas says it is not that he does not want them to return, but as Elizabeth's Perpetual Reincarnation curse makes it so she will inevitably die right in front of Meliodas' eyes, he thinks that if he remains in Purgatory, he can cheat the curse. Ban, however, says that it does not matter because the curse has been already activated and asks if he thinks that Elizabeth would accept that and tells him not to give up, otherwise they have already lost. He assures Meliodas that he will save Elizabeth from her curse and that Ban will find a way to resurrect Elaine, so he should keep it simple. Meliodas says nothing about it is simple but does not deny that he is right.

The three of them return to fight the Demon King once again, who has grown tired of fighting them because his power, The Ruler render any attack useless against him, including Ban's Snatch, Wild's physical power, and Meliodas' Full Counter (even powerful techniques like Revenge Counter), the latter claimed by the Demon King to be an inferior copy of Chandler's technique, stating that if Meliodas does not resort to his original magic power there would be no chance for him of winning.

Meliodas wakes up and Ban informs him that they were defeated yet again. Meliodas is shocked to see Wild bleeding due to protecting him while unconscious. Ban playfully slaps Wild on his wound causing him pain. Then Ban tries something and, to their surprise, it somehow heals Wild. Ban states that after six decades of fighting his body has gotten used to "giving energy" since every time he tried to use Snatch, his power was absorbed by the Demon King, so he somehow took the injuries from Wild, "giving" the boar his health back. Ban then asks Meliodas if what his father said was true, about his true magic power being as great as it was, but Meliodas vehemently dismiss the subject. The group ponders about how they can beat the Demon King when his ability can apparently rule over logic itself and that is when an idea comes to Meliodas.

Back in the battlefield, the Demon King asks Ban why he keeps on trying to steal his power but Ban rebukes his argument by claiming that he will "give" him energy, surprisingly bringing down the Demon King to his knee. Meliodas then reveals the true nature of the Demon King's magic ability: "Inversion"; all manners of attack or weakening directed at him are converted into healing and strengthening instead, so it works both ways as any energy given to him will rob him of his own strength.

The Demon King commends them for figuring out his secret and claims that this is not going to be as boring as he thought and all of them get ready to begin their real fight.

Q310. Achisman-san (From India): Do Meliodas and his brother have a mother?

Nakaba: I'd assume so.

The Last Page of Chapter 283